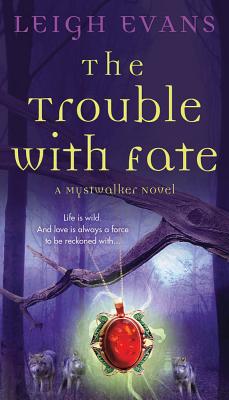 The Trouble with Fate

My name is Hedi Peacock and I have a secret. I'm not human, and I have the pointy Fae ears and Were inner-bitch to prove it. As fairy tales go, my childhood was damn near perfect, all fur and magic until a werewolf killed my father and the Fae executed my mother. I've never forgiven either side. Especially Robson Trowbridge. He was a part-time werewolf, a full-time bastard, and the first and only boy I ever loved. That is, until he became the prime suspect in my father's death…

Today I'm a half-breed barista working at a fancy coffee house, living with my loopy Aunt Lou and a temperamental amulet named Merry, and wondering where in the world I'm going in life. A pretty normal existence, considering. But when a pack of Weres decides to kidnap my aunt and force me to steal another amulet, the only one who can help me is the last person I ever thought I'd turn to: Robson Trowbridge. And he's as annoyingly beautiful as I remember. That's the trouble with fate: Sometimes it barks. Other times it bites. And the rest of the time it just breaks your heart. Again…


Praise For The Trouble with Fate: A Mystwalker Novel…

“New talent Evans produces an edgy and bleak tale of an emotionally damaged young woman struggling to survive, at war with the two sides of her nature. Evans does some very interesting world building that places Hedi on the road to further dramatic adventures. A truly intriguing debut novel!” —Romantic Times Book Reviews for The Trouble With Fate

“A true storyteller with a tough heroine and an original and engrossing tale. Reader beware, if you pick up a Leigh Evans book, you won't put it down until the last page.” —Patricia Briggs, New York Times bestselling author of the Mercy Thompson series, on Leigh Evans.

“Her first time at bat, Leigh Evans has hit one out of the park. THE TROUBLE WITH FATE is the perfect mix of romance and action, with characters you can't help but root for and a twist that had me squealing with surprise. Evans offers a brilliant new take on fairies, werewolves, and magic--and this book is urban fantasy and paranormal romance at its best. I am officially addicted.” —Chloe Neill, New York Times bestselling author of the Chicagoland Vampires and Dark Elite series on The Trouble With Fate

“What a delicious read! THE TROUBLE WITH FATE is chock full of fun twists and sexy diversions, one of them named Robson. Leigh Evans is definitely one to watch. Get this book! You will not be disappointed!” —Darynda Jones, New York Times bestselling author of the Charley Davidson series

“It's rare to find a debut novel with a well-crafted world, a great story and dynamic characters, but this book has them all. I was grabbed early and hooked to the very end. I eagerly await the sequel!” —Karen Chance, New York Times bestselling author of the Cassandra Palmer and Dorina Basarab series on The Trouble With Fate

“Leigh Evans' brilliant debut, The Trouble with Fate, has a likeable, light-fingered heroine with smarts, a tough sexy hero with troubles, and a glimpse into a fascinating fae world that will have you howling for the next book. I loved it!” —Suzanne McLeod, author of The Shifting Price of Prey

“I loved THE TROUBLE WITH FATE. So fun and fast-paced. Leigh Evans takes everything you think you know about urban fantasy and throws it out the window, creating a world that's fresh, a heroine that's enthralling, and a world that's as complicated as it is engaging. I can't wait for the next book” —Nicole Peeler

“This book was a breathe of paranormal FRESH AIR. I have read an ENDLESS amount of the genre in the last few months, and to be honest, it all started swirling into a collective, repetitive, blur. This book broke the mold for me. It was action packed in JUST the right places, and with just the right amount of words.” —Reeka of Bound by Words on The Trouble With Fate

“Thank you Leigh Evans for writing The Trouble with Fate. I now have a new series to follow, characters to love, and world to escape to. The Trouble With Fate has everything I look for in a paranormal/ urban fantasy series. There is a quirky, determined heroine, a complex supernatural world, a well-developed plot with plenty of twists and turns, and, of course, a drool-worthy hero to spark plenty of chemistry.” —Book Savvy Babes