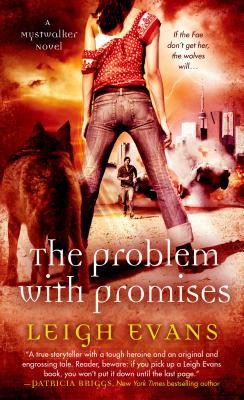 The Problem with Promises

Robson Trowbridge, the Alpha of Creemore and my gorgeous mate, tries to protect me, Hedi Peacock, half-Fae, half-were, from all the trouble I get into. The thing is, my past is pretty messy and bad guys keep knocking down my door. Witches, thug bikers, the North American Council of Weres, dark magic Fae, and even an evil wizard are all after me. The Old Mage is the only one I really care about: He has my dear twin brother captive on the other side of the Gates of Merenwyn—not cool. So my alpha love is helping me to keep my promise to free my brother…

YOU CAN'T AFFORD TO KEEP.

Unfortunately, everyone who helps me ends up in a heap of trouble too—including my Trowbridge. Now, I admit I've had my moments as a shivering coward, hoping he will come to my brave rescue. The whole Prince Charming thing is hard to shake. But these bad guys after me mean business and those damsel in distress days are over. You know that "last straw" metaphor? That was two straws ago. It's now or never. Again…

The Problem with Promises is the third Mystwalker Novel from Leigh Evans.

"A brilliant new take on fairies, werewolves, and magic…I am officially addicted."


Praise For The Problem with Promises: A Mystwalker Novel…

“Everyone is in jeopardy and the stakes could not be any higher… Readers looking for an explosive, action-packed thrill ride will definitely find it in The Problem With Promises.” —RT Book Reviews on The Problem with Promises

“Action, romance, magic and the paranormal! No reader will be able to resist the thrilling combination that Evans has delivered with each Mistwalker novel and The Problem with Promises is no exception!” —Reader to Reader Reviews

“A true storyteller with a tough heroine and an original and engrossing tale. Reader beware, if you pick up a Leigh Evans book, you won't put it down until the last page.” —Patricia Briggs, New York Times bestselling author