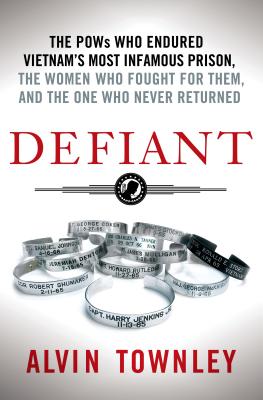 The POWs Who Endured Vietnam's Most Infamous Prison, The Women Who Fought for Them, and The One Who Never Returned

Winner of the Georgia Author of the Year Award in History

During the Vietnam War, hundreds of American prisoners-of-war faced years of brutal conditions and horrific torture at the hands of North Vietnamese guards and interrogators who ruthlessly plied them for military intelligence and propaganda. Determined to maintain their Code of Conduct, the POWs developed a powerful underground resistance. To quash it, their captors singled out its eleven leaders, Vietnam's own "dirty dozen," and banished them to an isolated jail that would become known as Alcatraz. None would leave its solitary cells and interrogation rooms unscathed; one would never return.

As these eleven men suffered in Hanoi, their wives at home launched an extraordinary campaign that would ultimately spark the nationwide POW/MIA movement. The members of these military families banded together and showed the courage not only to endure years of doubt about the fate of their husbands and fathers, but to bravely fight for their safe return. When the survivors of Alcatraz finally came home, one veteran would go on to receive the Medal of Honor, another would become a U.S. Senator, and a third still serves in the U.S. Congress.

A powerful story of survival and triumph, Alvin Townley's Defiant will inspire anyone wondering how courage, faith, and brotherhood can endure even in the darkest of situations.


Praise For Defiant: The POWs Who Endured Vietnam's Most Infamous Prison, The Women Who Fought for Them, and The One Who Never Returned…

“You told it exactly like it was. In this unexpected way, your book made it all worthwhile.” —GEORGE MCKNIGHT, POW, 1965-1973

“Defiant is a riveting tribute to the unyielding men who endured years of brutal captivity as POWs in Vietnam and the families they left behind. The men of the ‘Alcatraz Eleven' are true American heroes and their extraordinary stories will serve as an inspiration for generations to come.” —SENATOR JOHN MCCAIN, POW, 1967-1973

“These heroic men and women remind us how courage, devotion, and faith can triumph even in the darkest of times. In Defiant, Alvin Townley masterfully tells the inspirational and unforgettable story of our Vietnam POWs and the Alcatraz Eleven.” —PRESIDENT JIMMY CARTER

“Alvin Townley's story of the courage, valor and honor of eleven indomitable POWs and their wives is a new American classic that will be read as long as the breezes kiss Old Glory. As I read it I wept.” —STEPHEN COONTS

“This stirring tale by Alvin Townley of resilience and leadership under unimaginable conditions is a must read.” —JIM LOVELL, Commander of Apollo 13

“Defiant is Unbroken meets Band of Brothers - and then some...The devotion and undefeatable will of these courageous American heroes shines on every page and reminds us exactly what our great nation is made of.” —CONGRESSMAN PETE SESSIONS

“This moving and authentic epic of unrelenting heroism shines like the sun as an example of American men and women at their very best.” —Medal of Honor recipient GEORGE "BUD" DAY, POW, 1968-1973

“Defiant will make you proud to be an American, and Alvin Townley's writing makes you feel as if you are there yourself. It would be a wonderful textbook for a course on how to be a POW, but it is also a book for anyone on how to face and overcome adversity!” —WESLEY D. SCHIERMAN, POW, 1965-1973

“Alvin Townley has captured the individual accounts of these eleven men and woven them into a captivating story of resilience, courage and love of country.” —ROBERT H. SHUMAKER, POW, 1965-1973

“A unique American epic which must never be forgotten. Thanks to Alvin Townley's ability to convert its heartbreaking reality into vivid prose, its men and women are alive as human beings as well as symbols of their commitment to each other -- and their country.” —THOMAS FLEMING, author of The Officers' Wives

“Defiant is a must read for those who seek to understand and honor the very best of America and its heroes. Alvin Townley's exhaustive research shows us how our prisoners of war in Vietnam served with inspired bravery and unrelenting courage. We can now know in detail how the most abused of them all survived years of brutality and solitary confinement.” —MELVIN R. LAIRD, Secretary of Defense (1968-1972)

“In Defiant, Alvin Townley reveals a moving, inspiring, untold story of courage and sacrifice that stands as a vivid testimony to what the human spirit can overcome. This is an important and too often overlooked aspect of the Vietnam War's history…For those interested in Vietnam's Band of Brothers, it is a must read.” —JAY WINIK, bestselling author of April 1865 and The Great Upheaval

“Defiant is an astounding story that will capture your heart and mind proving once and for all that determination trumps circumstance.” —ANDY ANDREWS, New York Times bestselling author of How Do You Kill 11 Million People?, The Noticer, and The Traveler's Gift

“I carried this book from room to room and kept trying to put it down, but I couldn't stop reading. Alvin Townley shows the heart of what it means to be American in this tale of some of our greatest heroes. Defiant is superb.” —GREGORY A. FREEMAN, author of The Gathering Wind: Hurricane Sandy, the Sailing Ship Bounty, and a Courageous Rescue at Sea

“Defiant is all about voices – those that went unused for days by solitary prisoners of war, and those of silently suffering women back home who eventually felt no choice but to speak out. Alvin Townley soberly evokes the terror, sadness, frustration, pain and inspiration they all felt, and along the way, gives us a Vietnam War most of us have never heard about, involving legions of American women and imprisoned men fighting together, thousands of miles apart.” —ALAN HUFFMAN, author of Here I Am: The Story of Tim Hetherington, War Photographer

“The story of human courage, individual and family perseverance, survival based on a warrior's code of honor. Alvin Townley weaves the recollections of these remarkable men into a compelling narrative against the backdrop of war, freedom, forgiveness and reconciliation. An inspirational account of POWs who served with honor while in captivity and returned home with a commitment to serve their country.” —Larry Berman, author of Zumwalt: The Life and Times of Admiral Elmo Russell "Bud" Zumwalt, Jr.

“If you have ever wondered how real courage and ultimate perseverance should be defined, all you need to do is read these pages. If you have ever pondered whether Americans still have the grit and the ‘guts' to show the world what it takes to defend freedom, reading about the ‘Alcatraz Eleven' will bolster your confidence. What these men endured nearly defies description, but Alvin Townley has managed to pull it off brilliantly. The writing is hard-hitting and powerful, dynamic and breath-taking. So, too, is his retelling of the stoic courage of the loved ones stuck at home with uncertainty and doubt: uncertainty about their own abilities to bear up, then doubt in the fortitude and truthfulness of their own government. What the families did from afar, and how they ultimately put backbone into their own leaders and pushed accountability onto the captors of the POWs, is a story heretofore largely untold. It is a narrative as striking in its own right as the tales of the ‘Alcatraz Eleven' themselves.” —PHIL KEITH, award-winning author of Blackhorse Riders and Fire Base Illingworth

“Alvin Townley's Defiant is a compelling recounting of the horror, hope, hell, and humanity that was daily life for the American prisoners of war who struggled through existence at Hanoi's most brutal prison camp. Expertly researched and compellingly written, Townley's account of the reality of life both in Hanoi's prisons and for the families of the prisoners at home is inspiring reading and should be part of any Vietnam War library.” —ANDREW WIEST, author of The Boys of ‘67

“Alvin Townley has done a magnificent job of weaving together the powerful and complex story of eleven men who survived the unbelievable cruelty of their North Vietnamese captors. Defiant honors the bravery and sacrifice of our prisoners of war and their families as no other reporting has done to date. These men, many of whom I knew, deserve no less.” —RICHARD G. CAPEN, Assistant to the Secretary of Defense (1968-1971)

“With Defiant, Alvin Townley has done readers a huge favor. By describing the POWs' scenes of torture and deprivation in such detail--to the point we can almost feel our own bones crack under pressure--he reminds us that we should never take our civil liberties for granted. This book is a testament to the human spirit and how, in the worst of conditions with the best of men, it can be bent but never broken.” —DAVID ABRAMS, author of Fobbit

“In a fast-flowing narrative replete with reconstructed dialogue, Townley writes reverently of these POWs” —Publishers Weekly

“Defiant is a significant document of human survival and endurance under unspeakable circumstances, and, in a time when the White House levels charges of torture against fellow Americans, provides a reality check.” —World Affairs

“A gripping account of the ‘Alcatraz Eleven,' a group of American prisoners of war in North Vietnam who formed a tough core of heroic resisters despite brutal and relentless efforts to break them and convert them into fodder for the Communist propaganda machine. … Townley's telling of these important stories is fresh and vivid, thanks to his interviews with surviving prisoners and their family members. Defiant is an excellent book for younger readers with little knowledge of this searing chapter in American history, when a brash United States stumbled its way deeper and deeper into the Indochina morass. … Townley also adds an important, and often overlooked, dimension to the prisoners' stories -- that of their wives' campaign at home to thrust the plight of the P.O.W.'s into the national spotlight.” —The New York Times Book Review

“Townley shines a light on [the POWs'] courage and what their families back home went through.” —The New York Post

“Townley recounts, in detail, how Stockdale, Denton, and the other POWs endured years of almost unimaginable physical and mental torture, and the ways the men coped with the physical pain and emotional torment.” —VVA Veteran

“Defiant is a page-turner. … Defiant focuses on the prisoners -- ‘war criminals' to the Vietnamese -- who were upgraded from bad (Hanoi Hilton) to worse (Alcatraz). ‘No one group endured any more than the 11 brothers,' Townley writes, and he proves his point. ‘We should not forget,' and you won't.” —Marine Corps Times

Alvin Townley spent a year traveling throughout the country to explore the legacy of America's Eagle Scouts. In thousands of miles of travel, he met with Eagles from all walks of life. The result was Legacy of Honor, a uniquely powerful narrative of character and virtue in American life.

Alvin's journey truly began years ago in Atlanta, Georgia, where he followed the Scouting path of his grandfather and father and earned his Eagle Scout rank with Troop 103. He is a Brotherhood Member of the Order of the Arrow and has completed High Adventure treks at the Florida Sea Base, the Northern Tier Canoe Bases, and Philmont Scout Ranch.

The author graduated from Washington and Lee University in Lexington, Virginia. He has interned in the U.S. House of Representatives, served on the executive staff of an international consulting firm, and worked for his alma mater, where he built relationships with alumni across the country and spoke to classes on corporate strategy and ethics.

Alvin currently resides in Atlanta, Georgia, where he works and coaches at Marist School. He also works with Reach for Excellence, a tuition-free program benefiting talented middle school students from underserved communities.