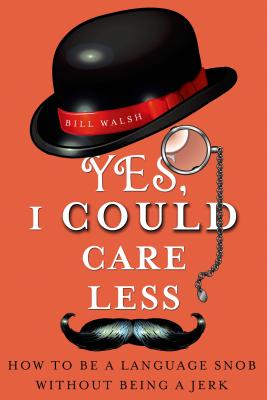 Yes, I Could Care Less

How to Be a Language Snob Without Being a Jerk

Yes, I Could Care Less is a lively and often personal look at one man's continuing journey through the obstacle course that some refer to, far too simply, as "grammar."

These are interesting times for word nerds. We ate, shot and left, bonding over a joke about a panda and some rants about greengrocers who abuse apostrophes. We can go on Facebook and vow to judge people when they use poor grammar. The fiftieth anniversary of the publication of The Elements of Style inspired sentimental reveries. Grammar Girl's tally of Twitter followers is well into six digits. We can't get enough of a parody of the Associated Press Stylebook, of all things, or a collection of "unnecessary" quotation marks.

Could you care less? Does bad grammar or usage "literally" make your head explode? Test your need for this new book with these sentences:

"Katrina misplaced many residents of New Orleans from their homes."
"Sherry finally graduated college this year."
"An armed gunman held up a convenience store on Broadway yesterday afternoon."

Pat yourself on the back if you found issues in every one of these sentences, but remember: There is a world out there beyond the stylebooks, beyond Strunk and White, beyond Lynne Truss and Failblogs. In his long-awaited follow-up to Lapsing Into a Comma and The Elephants of Style, while steering readers and writers on the proper road to correct usage, Walsh cautions against slavish adherence to rules, emphasizing that the correct choice often depends on the situation. He might disagree with the AP Stylebook or Merriam-Webster, but he always backs up his preferences with logic and humor.

Walsh argues with both sides in the language wars, the sticklers and the apologists, and even with himself, over the disputed territory and ultimately over whether all this is warfare or just a big misunderstanding. Part usage manual, part confessional, and part manifesto, Yes, I Could Care Less bounces from sadomasochism to weather geekery, from "Top Chef" to Monty Python, from the chile of New Mexico to the daiquiris of Las Vegas, with Walsh's distinctive take on the way we write and talk.


Praise For Yes, I Could Care Less: How to Be a Language Snob Without Being a Jerk…

“Reading Yes, I Could Care Less is like bellying up to your favorite neighborhood bar while a cranky yet lovable uncle holds forth on the perils of comma splices and misplaced hyphens. Walsh is combative and funny, and he doesn't suffer fools gladly In short, Walsh brings some welcome newsroom swagger and regular-guy moxie into the often prim world of style and syntax.” —The Washington Post

“You should be so lucky as to have Bill Walsh as your editor. Pay attention. Be clear. Be precise. Don't be a jerk.” —Baltimore Sun

“If you dream about correcting the office grammar Nazi, pick up Washington Post copyeditor Bill Walsh's witty book Yes, I Could Care Less.” —The Washingtonian

“How can you not love a language maven who admits up front (well, in the Epilogue anyway) that he's nuts? And who wouldn't be? Bill Walsh has to walk a fine line. He's enough of a pickypants to satisfy readers of The Washington Post, but he never crosses the line into jerkitude. Or hardly ever. (Give up the hyphen, Bill. The word is email.) Oh, and did I mention that's he's funny? Armed gunmen, he tells us, are ‘the worst kind.' And you probably think you know what domestic beer is. But as the author can tell you, it's in the eye of the bartender.” —Patricia T. O'Conner, author of Woe Is I and, with Stewart Kellerman, Origins of the Specious: Myths and Misconceptions of the English Language.

“In his third volume of musings and pronouncements on language, Bill Walsh argues persuasively that there's room at the table for both prescriptivists and descriptivists--or what he calls ‘the sticklers' and ‘the spoilsports.' With keen intelligence, dry humor, and panache, he exhorts us not only to think more critically about how we write and speak but also to strive for ‘tiny acts of elegance' in that ‘slippery and elusive' realm called standard American English. Some will call Walsh a demigod of usage. Others will call him a demagogue. I call him, oxymoronically, our most amiable curmudgeon of style.” —Charles Harrington Elster, author of The Accidents of Style and Verbal Advantage

“What Walsh calls his ‘curmudgeon's stylebook' contains such useful items as differentiating names of peoples. . . . His ‘gray areas' are stimulating.” —William Safire, On Language, New York Times Magazine on The Elephants of Style

“A mother lode for language lovers.” —American Journalism Review on Lapsing Into a Comma

“Bill Walsh is a stylist with a sense of humor, a rare commodity these days.” —Frank Mankiewicz, former president, NPR, on Lapsing Into a Comma

BILL WALSH is a copy editor at The Washington Post, where he has worked since 1997. He is a regular presenter at the annual conferences of the American Copy Editors Society. He is the author of Lapsing Into a Comma and The Elephants of Style.
Loading...
or support indie stores by buying on