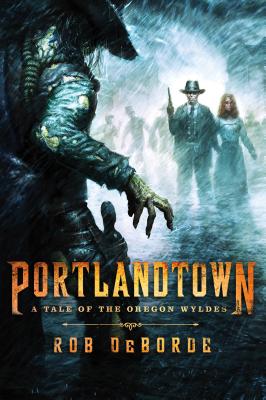 A Tale of the Oregon Wyldes

Welcome to Portlandtown, where no secret is safe---not even those buried beneath six feet of Oregon mud.

Joseph Wylde isn't afraid of the past, but he knows some truths are better left unspoken. When his father-in-law's grave-digging awakens more than just ghosts, Joseph invites him into their home hoping that a booming metropolis and two curious grandtwins will be enough to keep the former marshal out of trouble. Unfortunately, the old man's past soon follows, unleashing a terrible storm on a city already knee deep in floodwaters. As the dead mysteriously begin to rise, the Wyldes must find the truth before an unspeakable evil can spread across the West and beyond.
Rob DeBorde's Portlandtown is a supernatural western, a fantastic blend of horror, magic, and zombies sure to excite even the most demanding genre fan.


Praise For Portlandtown: A Tale of the Oregon Wyldes…

"DeBorde's extraordinary first novel, a dark fantasy set in the Old West, tells a compelling tale of the battle between evil personified and a remarkable family with special abilities. Fans of Stephen King's "Dark Tower" series will enjoy discovering this accomplished writer."


A unique and fascinating horror novel. Cowboys, the supernatural, steampunk, and zombies . . . Portlandtown has enough to keep even the most demanding genre fan satisfied

ROB DEBORDE's first book, Fish on a First-Name Basis (2006, St. Martin’s Press), reads suspiciously like an indispensible guide to everything wet and edible with nary a zombie in sight. His award-winning online show, Deep Fried, Live! with Tako the Octopus, does, however, feature undead clams and mutant prawns, and his forays into film, television, and videogames have been chock full of supernatural beasties (particularly Good Eats). Portlandtown is his first novel. DeBorde lives downriver from Portland, Oregon, with his wife, Sue, and a pug named Chloe.