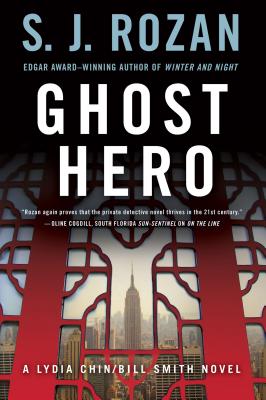 After a dry spell and verging on desperate for work, Chinese- American P.I. Lydia Chin agrees to take a case different from her usual fare. A man calling himself Jeff Dunbar hires her to track down a rumor about a very unusual Chinese painter. Contemporary Chinese painting is blazing hot in the art world and no one is hotter than Chau Chun – Ghost Hero Chau. A brilliant and widely-recognized artist, known for mixing classical forms and contemporary political comment, his works are highly prized. The rumor of new paintings by Chau is racing through the Manhattan art world. There's only one problem – Ghost Hero Chau has been dead for twenty years.

Something is clearly amiss. Not only is the Ghost Hero dead, but Lydia's client isn't who he claims to be. And she's not the only PI looking into the case—Bill Smith and Lydia discover that Jack Lee, also Chinese-American, a PI and an art expert as well —has been hired to chase down the same rumors. What starts as buzz over new paintings by a dead artist quickly becomes something far more complex and dangerous, involving secrets that more than one person seems willing to go to extremes to protect.

“S.J. Rozan is a good old-fashioned mystery writer, and I mean that as a high compliment.” —Maureen Corrigan, The Washington Post

“...excellent ... Engaging characters, crisp dialogue, intelligent storytelling, and a minimum of violence add up to another winner for Rozan.” —Publishers Weekly (Starred Review)

“Rozan picks up the pace and adds a new plot twist to pull off another coup.” —Marilyn Stasio, The New York Times

“...more cons and double-crosses than The Sting.” —Kirkus Reviews