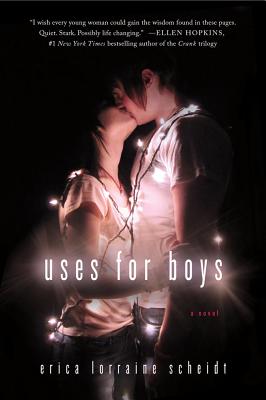 Anna remembers a time before boys, when she was little and everything made sense. When she and her mom were a family, just the two of them against the world. But now her mom is gone most of the time, chasing the next marriage, brining home the next stepfather. Anna is left on her own—until she discovers that she can make boys her family. From Desmond to Joey, Todd to Sam, Anna learns that if you give boys what they want, you can get what you need. But the price is high—the other kids make fun of her; the girls call her a slut. Anna's new friend, Toy, seems to have found a way around the loneliness, but Toy has her own secrets that even Anna can't know.

Then comes Sam. When Anna actually meets a boy who is more than just useful, whose family eats dinner together, laughs, and tells stories, the truth about love becomes clear. And she finally learns how it feels to have something to lose—and something to offer. Real, shocking, uplifting, and stunningly lyrical, Uses for Boys by Erica Lorraine Scheidt is a story of breaking down and growing up.


Praise For Uses for Boys: A Novel…

“Many girls will relate to the fact that 'there are no fathers in this story'… Scheidt's spare and poetic debut offers up pretty images for some decidedly unpretty situations ('the unmade bed is peaked and stormy'); at times, her prose feels as tightly wrought as a novel in verse. This is a story about where we come from, and how, sometimes, we have to break free from the past in order to shape our own future... Lots of teens will see themselves in the pages of this beautiful, honest novel.” —Booklist (Starred Review)

“Like its narrator, Uses for Boys is poetic, sensual, edgy and strong. Captivated, I finished it in two sittings and sobbed at the end.” —Francesca Lia Block, New York Times bestselling author of Weetzie Bat and I was a Teenage Fairy

“If somebody had handed me this book when I was fifteen, I would have felt 75% less alone and 100% less crazy.” —Pam Houston, award-winning author of Cowboys Are My Weakness and Contents May Have Shifted

“Some writers know how to make something terribly complicated and true...simple. That's what Erica Lorraine Scheidt does in Uses for Boys. With stark, lucid prose, she hones in on that experience we girls know well: we believe boys will fill our emptiness.” —Kerry Cohen, author of Loose Girl

By day, Erica Lorraine Scheidt is a marketing consultant and for some years had her own PR agency specializing in video games. She now works part-time for a non-profit organization, while also serving on the board of directors of ISIS, a 10-year-old non-profit focused on sexual literacy. As a teenager, Erica studied writing with William Burroughs, Allen Ginsberg, and Jim Carroll at the Jack Kerouac School of Disembodied Poetics in Boulder, Colorado. In 2007, she was nominated by Rick Moody for the Best New American Voices anthology and in 2008 received an MA in creative writing at University of California, Davis. Erica is a longtime volunteer at 826 Valencia, working with teenage writers who are crafting their own stories, and is passionate about writing by teens and for teens. She is the author of Uses for Boys. She lives in San Francisco.
Loading...
or
Not Currently Available for Direct Purchase