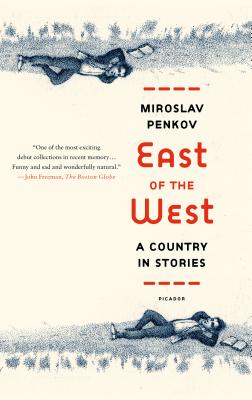 A grandson tries to buy Lenin's corpse on eBay for his Communist grandfather. A failed wunderkind steals a golden cross from an Orthodox church. Every five years, a boy meets his cousin (the love of his life) in the river that divides their village into east and west. These are Miroslav Penkov's strange, unexpectedly moving visions of his home country, Bulgaria, and they are the stories that make up this beguiling and deeply felt debut. Animated by Penkov's unmatched eye for the absurd, East of the West is a brilliant portrait of a country with its own compass.


Praise For East of the West: A Country in Stories…

“An agile and assured debut . . . In each of these stylistically old-school yet freshly envisioned morality tales, Penkov burnishes brute circumstances to surprising beauty.” —Elle

“Splendid . . . These stories are not the promising work of a first-time author. They are already a promise fulfilled--wise, bright, and deep with sympathy.” —Alec Solomita, The New Republic

“Like Aleksandar Hemon, Ha Jin, and Edwidge Danticat, Penkov is a translingual. . . . His dexterous English prose [portrays] human beings left in limbo, without a compass.” —The Dallas Morning News

“A fantastic collection that lives up to its audacious subtitle . . . Penkov's writing style is clear and startling, filled with warmth and wisdom. . . . These are fearless, gutsy stories with tremendous impact.” —Philadelphia City Paper

Miroslav Penkov was born in 1982 in Bulgaria. He arrived in America in 2001 and completed a bachelor’s degree in psychology and an M.F.A. in creative writing at the University of Arkansas. He has won the Eudora Welty Prize in Fiction, and his story “Buying Lenin” was published in The Best American Short Stories 2008, edited by Salman Rushdie. He teaches creative writing at the University of North Texas, where he is a fiction editor for the American Literary Review. He is the author of East of the West.
Loading...
or support indie stores by buying on