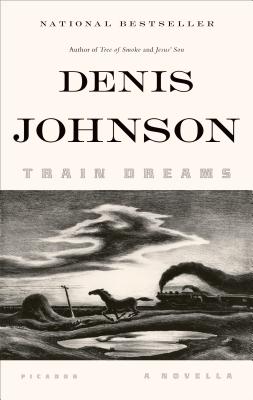 From the National Book Award-winning author Denis Johnson (Tree of Smoke) comes Train Dreams, an epic in miniature, and one of Johnson's most evocative works of fiction.

Suffused with the history and landscapes of the American West—its otherworldly flora and fauna, its rugged loggers and bridge builders—this extraordinary novella poignantly captures the disappearance of a distinctly American way of life.

It tells the story of Robert Grainer, a day laborer in the American West at the start of the twentieth century—an ordinary man in extraordinary times. Buffeted by the loss of his family, Grainer struggles to make sense of this strange new world. As his story unfolds, we witness both his shocking personal defeats and the radical changes that transform America in his lifetime.


Praise For Train Dreams: A Novella…

“[A] severely lovely tale . . . The visionary, miraculous element in Johnson's deceptively tough realism makes beautiful appearances in this book... I started reading ‘Train Dreams' with hoarded suspicion, and gradually gave it all away, in admiration of the story's unaffected tact and honesty . . .” —James Wood, The New Yorker

“National Book Award winner Johnson (Tree of Smoke) has skillfully packed an epic tale into novella length in this account of the life of Idaho Panhandle railroad laborer Robert Grainer . . . The gothic sensibility of the wilderness and isolated settings and Native American folktales, peppered liberally with natural and human-made violence, add darkness to a work that lingers viscerally with readers . . . Highly recommended.” —Library Journal (starred)

“National Book Award-winner Johnson, ever the literary shape-shifter, looks back to America's expansionist fever dream in a haunting frontier ballad about a loner named Robert Granier . . . Johnson draws on history and tall tales to adroitly infuse one contemplative man's solitary life with the boundless mysteries of nature and the havoc of humankind's breakneck technological insurgency, creating a concentrated, reverberating tale of ravishing solemnity and molten lyricism.” —Donna Seaman, Booklist

“Readers eager for a fat follow-up to Tree of Smoke could be forgiven a modicum of skepticism at this tidy volume . . . but it would be a shame to pass up a chance to encounter the synthesis of Johnson's epic sensibilities rendered in miniature in the clipped tone of Jesus' Son . . . An ode to the vanished West that captures the splendor of the Rockies as much as the small human mysteries that pass through them, this svelte stand-alone has the virtue of being a gem in itself, and, for the uninitiated, a perfect introduction to Johnson.” —Publishers Weekly (starred)

“Denis Johnson's Train Dreams is like a long out-of-print B-side, a hard-to-find celebrated work treasured by those in the know that's finally become available to the rest of us . . . . Train Dreams is a peculiarly gripping book. It palpably conjures the beauty of an American West then still very much a place of natural wonder and menace, and places one man's lonely life in that landscape, where he's at once comfortably at home and utterly lost.” —Dan DeLuca, The Philadelphia Inquirer

“Johnson is one of our finest writers. His characters are usually not the high and mighty but the down-and-out, sometimes marginalized individuals who struggle to communicate their deeper longings or their encounters with the transcendent. A poet, he infuses his narratives with images that sparkle and even jolt but never overwhelm the reader . . .” —Gordon Houser, The Wichita Eagle

“Train Dreams is a gorgeous, rich book about the classic American myth, but written for a country that's lost faith in its own mythology . . . Train Dreams, luscious with grief, regret, and lowered expectations, is a lesson in end-of-the-frontier humility for a country anticipating apocalypse.” —K. Reed Perry, Electric Literature

“Johnson captures the feeling of the woods and the small towns built around mining, logging and the new railroads. Indians and Chinese laborers also play significant roles . . . The writing is spare and frequently beautiful; Johnson's backwoods dialogue and tall tales are often hilarious; and he graces us with such wonderful words as ‘pulchritude' and ‘confabulation'--it's a shame we don't hear them much anymore.” —Stephen K. Tollefson, San Francisco Chronicle

"In a way, Train Dreams puts me in mind of a late Bob Dylan album: with the wildness and psychedelia of youth burned out of him, Johnson's eccentricity is revealed as pure Americana.” —Gabriel Brownstein, The Plain Dealer (Cleveland)

“A meditative, often magical book . . . Deceptively simple language and arresting details make this a book to read slowly . . . Johnson's portrait of a man who stands still as life marches on is itself something timeless.” —Kate Tuttle, Boston.com


“Train Dreams . . . is a gem of a story, set in rough times, in a tough terrain, and tenderly told.” —Bob Minzesheimer, USA Today

“Johnson's new novella may be his most pared-down work of fiction yet, but make no mistake--it packs a wallop . . . Train Dreams is a small book of weighty ideas. It renders the story of America and our westward course of empire in the most beautiful and heartbreaking manner imaginable.” —Andrew Ervin, The Miami Herald

“I first read Denis Johnson's Train Dreams in a bright orange 2002 issue of The Paris Review and felt that old thrill of discovery . . . Every once in a while, over the ensuing nine years, I'd page through that Paris Review and try to understand how Johnson had made such a quietly compelling thing. Part of it, of course, is atmosphere.” —Anthony Doerr, The New York Times Book Review

“Johnson beautifully conveys what he calls ‘the steadying loneliness' of most of Grainier's life, the ordinary adventures of a simple man whose people are, we hear, ‘the hard people of the northwestern mountains,' and toward the end even convinces us of his character's inquisitive and perhaps even deeper nature than we might first have imagined. Grainier ‘lived more than eighty years, well into the 1960s,' we learn. Most people who read this beautifully made word-engraving on the page will find him living on.” —Alan Cheuse, NPR

“Train Dreams is a portrait of containment, of compression and restraint . . . On the one hand, what Johnson is evoking is the sweep of time, of history, as seen through an archetypal life. Grainer is an ideal filter for such an effort: born in one century, living mostly in another, he becomes a three-dimensional metaphor for the industrialization of the country, the slow passage from rural to commercial, the commodification of our collective soul.” —David. L. Ulin, The Los Angeles Times

“Train Dreams is an eloquently scattershot biography of a fictional labourer who lived much of his life in the woods, alone. It's a compressed epic about wolf-children, ghosts, wilderness, fearsome weather and the lingering threads that kept man tied to animal in the western parts of our continent--a connection lost to the past century . . . [It] is as magnificent, spellbinding and intermittently awkward as anything Denis Johnson has ever done . . .” —José Teodoro, Edmonton Journal

“While in [Johnson's] writerly company you cannot help but believe that the world is a function of his apprehension of it, and it is this quality that lends his matchless prose its sense of having been less written than received, an effortless and profound transmission, radio waves unscrolling in the black sea between the prairie and the star map--all that heady bullshit, but ringing true . . . Train Dreams is also very funny.” —Justin Taylor, The Faster Times

“Grainier's story is the story of an ordinary man told in an extraordinary way in extraordinarily spare yet magical prose . . . some of Johnson's best writing is on display here. It is a book of wonders both real and imagined, of great locomotives that traversed the continent and sawmills that conquered the big woods, of a curse by a persecuted ‘Chinaman' that (perhaps) brings destruction on Grainier's wife and daughter and their little cabin in the woods, a great fire Grainier would remember his entire life, like something Biblical in modern times.” —Anthony Wallace, The Arts Fuse

“At his worst, man is haunted by the past--the past reappearing in our dreams as a constant reminder of mistakes, of loved ones lost and of the indelible mark left on our memory by the sometimes violent imagery of life. Denis Johnson . . . portrays these sentiments in Train Dreams, a perfectly understated novella that tells the story of everyman Robert Grainier . . . Grainier is a man ultimately measured by movement: 'He'd started his life story on a train ride he couldn't remember, and ended up standing around outside a train with Elvis Presley in it.'" —Lucas Sarcona, News Review

“Denis Johnson's novel . . . is like a crystal: hard, gem-like, and intricately structured . . . Johnson's prose is simple yet lyrical, and its clear beauty often reflects the things it describes . . . Even more striking are the descriptions of Grainier's almost elemental lonesomeness.” —Anthony Domestico, Commonweal