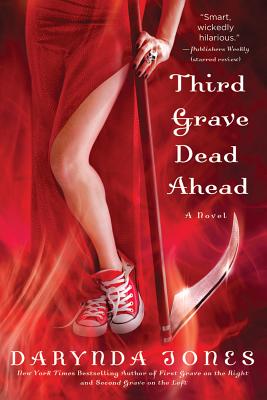 Paranormal private eye. Grim reaper extraordinaire. Whatever. Charley Davidson is back! And she's drinking copious amounts of caffeine to stay awake because every time she closes her eyes she sees him: Reyes Farrow, the sexy son of Satan who's part human, part supermodel, and all fired up. Yes, she did imprison him for eternity, but come on. How is she supposed to solve a missing-persons case, deal with an ego-driven doctor, calm her curmudgeonly dad, and take on a motorcycle gang hell-bent on murder when the devil's son just won't give up on his plan of seduction…and revenge?

“Jones perfectly balances humor and suspense in [this] paranormal thriller featuring grim reaper, PI, and ‘all-around badass' Charley Davidson…It's the distinctive characters, dead and alive, and the almost constant laughs that will leave readers eager for the next installment.” —Publishers Weekly (starred review) on SECOND GRAVE ON THE LEFT

“This is an amazing book and a fantastic series! In a lot of ways it is similar to Janet Evanovich's Stephanie Plum series only ten times better!” —Night Owl Reviews on SECOND GRAVE ON THE LEFT

“A saucy sequel…Readers will be captivated by Charley's near-death adventures.” —The Associated Press on SECOND GRAVE ON THE LEFT

“Four and a half stars. Snarky, sassy Charley is back and taking no guff in Jones's action-packed new offering…There is murder and mystery aplenty…fun.” —RT Book Reviews on SECOND GRAVE ON THE LEFT

“Sexy, sassy . . . Jones's characters, both living and dead, are colorful and endearing. . . . Cheeky charm . . . sarcastic wit.” —The Associated Press on FIRST GRAVE ON THE RIGHT

“Jones skillfully establishes the novel's setting and keeps up the pace with plenty of action. And let's be honest--the sex is pretty hot, too. Fans of Sherrilyn Kenyon and other authors of paranormal romance will love this series debut.” —Library Journal (starred review) on FIRST GRAVE ON THE RIGHT

“Fast-talking Charley's wicked exuberance and lust for life will appeal to fans of MaryJanice Davidson and Janet Evanovich and maybe fill a hole for those mourning the recently canceled Ghost Whisperer.” —Publishers Weekly on FIRST GRAVE ON THE RIGHT

“Jones makes a truly memorable debut with her unique tale that is sexy, mysterious, and sarcastically fun!” —RT Books Reviews on FIRST GRAVE ON THE RIGHT

“It's a fun, sexy, exciting read.” —Suspense Magazine on FIRST GRAVE ON THE RIGHT