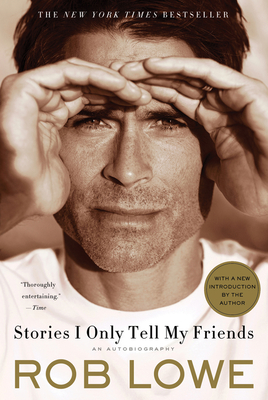 Stories I Only Tell My Friends

A teen idol at fifteen, an international icon and founder of the Brat Pack at twenty, and one of Hollywood's top stars to this day, Rob Lowe chronicles his experiences as a painfully misunderstood child actor in Ohio uprooted to the wild counterculture of mid-seventies Malibu, where he embarked on his unrelenting pursuit of a career in Hollywood.

The Outsiders placed Lowe at the birth of the modern youth movement in the entertainment industry. During his time on The West Wing, he witnessed the surreal nexus of show business and politics both on the set and in the actual White House. And in between are deft and humorous stories of the wild excesses that marked the eighties, leading to his quest for family and sobriety.

Never mean-spirited or salacious, Lowe delivers unexpected glimpses into his successes, disappointments, relationships, and one-of-a-kind encounters with people who shaped our world over the last twenty-five years. These stories are as entertaining as they are unforgettable.


Praise For Stories I Only Tell My Friends: An Autobiography…

“[Lowe] writes viscerally and insightfully...He looks back at the aberrant highs of his heart-throb days, the changing nature of stardom in Hollywood, the trade-off he has made between high life and home life, and the step-by-step effort behind his show business survival. He looked like the callowest kid in the "Outsiders" crew. Now he looks like the sturdiest of them all” —The New York Times

“I really enjoyed it...Thoroughly entertaining: the Brat Pack years, the Wayne's World years, the Alcoholic Obscurity, the Glamorous Romances (Princess Stephanie of Monaco!), the Inevitable Rehab, and the Triumphant Comeback on The West Wing.” —Time Magazine

“[Lowe's] charming, honest, even affectionate memoir is the story of strong guts behind a strikingly handsome face...A book to recommend widely.” —Booklist

“A fresh pop-culture history of Hollywood in the '70s and '80s from the point of view of the man who lived it…[Lowe] is as funny as he is thoughtful. This is the best type of celeb memoir, because its author is as interested in the world as the world is interested in him.” —People Magazine

“The world would be a better place if more stars' memoirs were like Lowe's--chatty, dishy, and with celebrity walk-ons (Tom Cruise! Sarah Jessica Parker! Princess Stephanie of Monaco! Martin Sheen!) galore. As entertaining as a Brat Pack film festival.” —Parade

Rob Lowe began his acting career at the age of eight in local television and theater. After his family relocated to Los Angeles, Lowe began his national acting career starring in the ABC television series “A New Kind of Family.” In May 2010, Rob Lowe joined the cast of NBC’s “Parks and Recreation” where he played the role of Chris Traeger. His television work also includes a three-episode appearance on Showtime’s “Californication,” in which Lowe plays unpredictable, megawatt movie star Eddie Nero. Preceding his move to “Parks and Recreation,” Lowe stared in the ABC-TV hit series “Brothers & Sisters.”. Additionally, for four seasons (from 1999 – 2003) Lowe starred as Sam Seaborn on Hit NBC drama “The West Wing.” His performance in the show garnered Lowe an Emmy nomination, as well as two Golden Globe nominations for Outstanding Lead Actor in a Drama Series. He was nominated three times for the Screen Actors Guild award, winning twice. In September of 2005 Lowe made his West End debut starring in Aaron Sorkin’s “A Few Good Men”, receiving rave reviews at the Royal Haymarket Theatre in London. In 2006, Lowe starred in the hit satire “Thank You for Smoking”. In Spring of 2011 Rob Lowe added author to his credits with the release of his very first memoir Stories I Only Tell my Friend: An Autobiography. Complete with adolescent anecdotes, Rob Lowe shares astoundingly personable excerpts as he recalls his encounters, experiences, and the audition that changed his life forever.
Loading...
or support indie stores by buying on