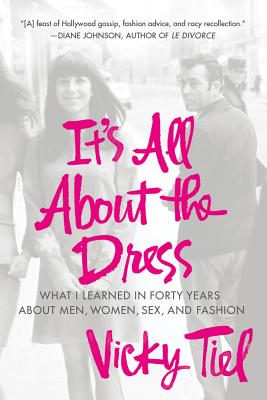 It's All About the Dress

What I Learned in Forty Years About Men, Women, Sex, and Fashion

Vicky Tiel started as an "it" girl of the 1960s and has had a four decade career designing clothes that make real women look fabulous. Her sexy, fresh hot pants and miniskirts were used by Woody Allen in his first movie, What's New, Pussycat?, her classic design inspired the red dress that transformed Julia Roberts in Pretty Woman, and her creations are worn today by stars such as Halle Berry and Kim Kardashian. Tiel's own life has been dance-the-night-away fun, from her earliest days flunking out of Parsons to design on her own, to starting a chic boutique with best friend Mia Fonssagrives in Paris, from marrying MGM's top make-up man to becoming Elizabeth Taylor's dear friend and part of her longtime entourage. Tiel forged her own path, and picked up some distinctive and hard-earned lessons from the rich, famous and celebrated along the way.

In IT'S ALL ABOUT THE DRESS, you'll get a glimpse of what it's like to be Hollywood royalty (think yachts, tiny dogs, giant pearls and peanut butter sandwiches washed down with Chateau Margaux), discover the seduction secrets of the greats (from Kim Novak to Goldie Hawn to Warren Beatty), take in a little husband-hunting advice, and even learn legendary model Dorian Leigh's recipe for gigot d'agneau sept heures.

Vicky Tiel will teach you to dress like a sex symbol , cook like the owner of a French country inn, and seize what you want from the world like an American ingénue.


Praise For It's All About the Dress: What I Learned in Forty Years About Men, Women, Sex, and Fashion…

“Not even the most resolutely stern reader will be able to resist this feast of Hollywood gossip, fashion advice and racy recollection by the noted designer Vicky Tiel, who knew Marilyn and Marlon, was the inventor of notable trends like miniskirts and jumpsuits, and is a natural and funny writer who tells all. Delicious!” —Diane Johnson, author of Le Divorce

“A naughty girl when that was the best a girl could be, inventor of the mini, Paris couturier at 18, Vicky Tiel tells spicy tales from dressing Kim, Ursula and Miles Davis, teasing Woody Allen, staying up late with Princess Grace and more intimate tales than you thought you'd want to know from her years in the entourage of Liz and Dick. Comes complete with tricks you need: bedroom advice, supermodels' diet guide, how to get men to give jewelry and the recipe for a perfect pink tuna fish sandwich.” —Gael Greene, author of Insatiable: Tales from a Life of Delicious Excess.

“A delicious romp...her memoir reads like all of the juiciest bits of your favorite gossip magazine, pushing back the curtains of an over-the-top life among the who's who of the '60s-'80s.” —Kirkus Reviews

“If you have not been frolicking throughout Europe and Hollywood with the rich and famous this summer, dive into the memoir of fashion designer and bon vivant Vicky Tiel… Reading her stories is a grand time all on its own.” —Wall Street Journal

“Growing up in the suburbs of Detroit, I remember reading an article in Life magazine about two girls who graduated from Parsons School of Design in New York and moved to Paris, where Elizabeth Taylor and Richard Burton opened a boutique for them. This fantasy fueled my dream. Dreams can carry a person farther than anything else. Vicky Tiel was my original inspiration!” —fashion designer Anna Sui

Vicky Tiel began designing clothes forty years ago in Paris and still owns a boutique there. Her custom couture dresses are sold in Bergdorf Goodman and Neiman Marcus.  Her line of cocktail dresses and special occasion wear is sold through department stores nationwide. She lives in northern Florida near Alabama, and in Paris, France.
Loading...
or support indie stores by buying on