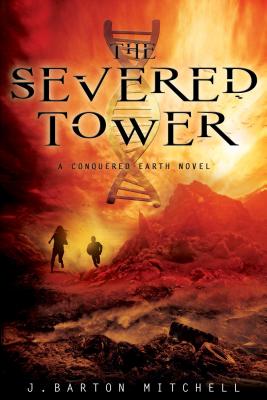 J. Barton Mitchell's sci-fi tour de force Conquered Earth series set in an alien-invaded post-apocalyptic world returns as the children forge deeper into the most dangerous lands in search of The Severed Tower

Holt, Mira, and Max have fled Midnight City with Zoey after watching her repel an entire Assembly army. Zoey's powers are unlocked, but who and what she is remains a mystery. All she knows is that she must reach the Severed Tower, an infamous location in the middle of the world's most dangerous landscape: The Strange Lands, a place where the laws of physics have completely broken down. But the closer they get to the Tower, the more precarious things become. The Assembly has pursued Zoey into the Strange Lands. Among them is a new group, their walkers and machines strangely bereft of any color, stripped to bare metal, and whose agenda seems to differ from the rest. To make matters worse, the group hunting Holt are here, too, led by a dangerous and beautiful pirate named Ravan. So is Mira's first love, Benjamin Aubertine, whose singular ambition to reach the Tower threatens to get them all killed.

Then there's the Strange Lands themselves. They have inexplicably begun to grow, spreading outwards, becoming more powerful. Somehow, it all seems tied to Zoey herself, and the closer she gets to the Tower, the weaker she becomes.

J. BARTON MITCHELL is a screenwriter, comic book writer, and author. He studied creative writing at the University of Houston before going on to receive a B.S. in Film Studies from the University of Texas. After selling screenplays to Warner Bros. and 20th Century Fox, he created and wrote the comic book series Poe, published by Boom! Studios in 2009. Mitchell lives and writes in the Los Feliz area of Los Angeles.

“Mitchell's second in his young adult trilogy is a masterful mix of post-apocalyptic, dystopian science fiction with just a hint of steampunk. His narrative is edge-of-your-seat and nail-bitingly thrilling, his prose concise and visual, his battles epic, his characters memorable, his evildoers nightmarishly atrocious and his stars utterly unforgettable.” —Romantic Times

“Reminiscent of the fighting between Terminator-style robots and human beings, The Severed Tower is a good choice for teens who enjoyed writings like War of the Worlds by H. G. Wells and fans of science fiction television shows like Doctor Who This trilogy is sure to captivate a wide variety of teen readers.” —Voya Magazine

“Mitchell's prose debut, the first in a dystopian sci-fantasy series, is an imaginative mix of danger and humor . . . The action will keep readers turning the pages.” —Kirkus Reviews on Midnight City

“I have succumbed to Midnight City!” —Nancy Holder, New York Times bestselling author of the Wicked Saga, on Midnight City