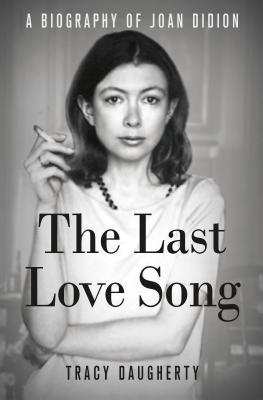 A Biography of Joan Didion

In The Last Love Song, Tracy Daugherty, the critically acclaimed author of Hiding Man (a New Yorker and New York Times Notable book) and Just One Catch, and subject of the hit documentary The Center Will Not Hold on Netflix delves deep into the life of distinguished American author and journalist Joan Didion in this, the first printed biography published about her life.

Joan Didion lived a life in the public and private eye with her late husband, writer John Gregory Dunne, whom she met while the two were working in New York City when Didion was at Vogue and Dunne was writing for Time. They became wildly successful writing partners when they moved to Los Angeles and co-wrote screenplays and adaptations together.

Didion is well-known for her literary journalistic style in both fiction and non-fiction. Some of her most-notable work includes Slouching Towards Bethlehem, Run River, and The Year of Magical Thinking, a National Book Award winner and shortlisted for the Pulitzer Prize. It dealt with the grief surrounding Didion after the loss of her husband and daughter. Daugherty takes readers on a journey back through time, following a young Didion in Sacramento through to her adult life as a writer interviewing those who know and knew her personally, while maintaining a respectful distance from the reclusive literary great.

The Last Love Song reads like fiction; lifelong fans, and readers learning about Didion for the first time will be enthralled with this impressive tribute.


Praise For The Last Love Song: A Biography of Joan Didion…

“A monumental, novelistic examination of Joan Didion's life and career...Daugherty crafts a complex, intricately shaded portrait of a woman also known for her inner toughness and intellectual rigor. This landmark work renders a nuanced analysis of a literary life, lauds Didion's indelible contributions to American literature and journalism (especially New Journalism), and documents a 'style [that] has become the music of our time.'” —Publisher's Weekly

“An eloquent work on the life of Joan Didion (b. 1934), fashioning her story as no less than the rupture of the American narrative...In this wonderfully engaging biography, Daugherty (English and Creative Writing/Oregon State Univ.; Just One Catch: A Biography of Joseph Heller, 2011, etc.) wisely sticks to Didion's near obsession with making sense of an increasingly incoherent narrative during the tumultuous decades of the waning 20th century...A dogged biographer elicits from Didion's life much more than tidy observations of "morality and culture.” —Kirkus Reviews, (Starred Review)

“In this engrossing biography of exceptional vibrancy, velocity, and perception, Daugherty astutely elucidates Didion's ever-evolving artistic explorations and political critiques as she interrogates the meaning and 'intelligibility' of literature and life. He also portrays this intensely candid, searching writer as endlessly hardworking, brilliantly innovative, and as sensitive as a tuning fork or divining rod, trembling with the intensity of it all, perfect in pitch, stunning in revelation.” —Booklist, (Starred Review)

“A masterful, wonderfully thought-provoking biography about one of America's greatest contributors to 20th century literature. Both touching and illuminating, this is that rare biography worthy of its source material.” —Stan Lee on Just One Catch

“Lucky all of us to get this great loving book.” —Jonathan Lethem on Hiding Man

“The inimitable Don B is fortunate in his biographer: Hiding Man is a richly detailed, full-length portrait of the artist at all stages of his too-short life.” —John Barth on Hiding Man

Tracy Daugherty is the author of several novels and short story collections, and a book of personal essays. His critically acclaimed biography of Donald Barthelme, Hiding Man was published in 2009. He has received fellowships from the Guggenheim Foundation and the National Endowment for the Arts. Currently, he is Distinguished Professor of English and Creative Writing at Oregon State University.
Loading...
or
Not Currently Available for Direct Purchase