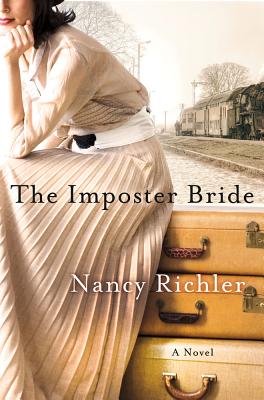 “Shortly after WWII, Lily arrives in Montreal to marry Sol Kramer. Sol rejects her, so his brother, Nathan, out of pity, marries Lily instead. Pity turns to love, but it isn't enough for Lily, who disappears leaving an infant daughter, Ruth, behind with Nathan. Family members thought Lily was an impostor, posing as a cousin, but who was she? Through the years, Ruth struggles to learn more about her mother through a diary, an uncut diamond, and shiny rocks arriving in the mail. Beautifully written, wistful, and suspenseful, the stories of Lily and Ruth are each a glimpse of the heartache that is the aftermath of war.”
— Joanne Doggart, Where the Sidewalk Ends, Chatham, MA
View the List

"The Imposter Bride" by Nancy Richler is an unforgettable novel about a mysterious mail-order bride in the wake of WWII, whose sudden decision ripples through time to deeply impact the daughter she never knew
In the wake of World War II, a young, enigmatic woman named Lily arrives in Montreal on her own, expecting to be married to a man she's never met. But, upon seeing her at the train station, Sol Kramer turns her down. Out of pity, his brother Nathan decides to marry her instead, and pity turns into a deep and doomed love. It is immediately clear that Lily is not who she claims to be. Her attempt to live out her life as Lily Azerov shatters when she disappears, leaving a new husband and a baby daughter with only a diary, a large uncut diamond and a need to find the truth
Who is Lily and what happened to the young woman whose identity she stole? Why has she left and where did she go? It's up to the daughter Lily abandoned to find the answers to these questions, as she searches for the mother she may never find or truly know.


Praise For The Imposter Bride…

Praise for The Imposter Bride

“Richler infuses her work with iconic images from the era she covers, painting a rich image of the Canadian Jewish community, their customs and family relationships, in a past century… A beautiful tale.” – Kirkus Reviews


“A powerful story of identity, loyalty and loss, of the lies that haunt us and the truth that makes us whole again.  Evoking the postwar era to underscore timeless theme, Richler's elegant prose resonates.” – Pam Jenoff, international bestselling author of The Ambassador’s Daughter


“Richler is back, and with an elegant, ambitious, accomplished new work.” – Globe and Mail (Canada)

“The Imposter Bride [is] exquisitely written, filled with interesting and unpredictable characters, and has an intricate plot that doesn't let go.  It's good old-fashioned story-telling at its best.” – Alyson Richman, author of The Lost Wife


“At once heartrending and hopeful… Nancy Richler dissects the mysteries of family bonds and betrayals with stunning emotional precision and magical insights into the human heart’s ability to heal.” – Ellen Feldman, author of Lucy and Next to Love


“A hopeful testament to the power of family and memory, and the importance and meaning of one’s name.” – Winnipeg Free Press (Canada)

“With delicacy and warmth, Richler weaves together the threads of a family: its closeness and secrets, opaqueness and hidden beauty, like the uncut gem whose mystery haunts these realistic characters.” – Daphne Kalotay, international bestselling author of Russian Winter

"An intriguing tale of historical fiction that will transport you from Montreal to war-torn Europe, and back again for a satisfying resolution of one family's haunting secrets." –Shilpi Somaya Gowda, author of Secret Daughter

“Nancy Richler conceives a complex, multi-layered quest for identity that will compel readers to share Ruth’s journey to find, understand, and love the mother who abandoned her.” –Nancy Jensen, author of The Sisters

"Nancy Richler gives us a mother and daughter  marked by the Holocaust who, through their heartbreakingly human struggle to live and connect, give us a new understanding of  that cataclysmic horror." – Mary Pat Kelly, author of Galway Bay

NANCY RICHLER's short fiction has been published in various American and Canadian literary journals, including "The Fiddlehead," "Room of One's Own," and "The New Quarterly." Her previous novel, "Your Mouth is Lovely, "published in eleven countries, won the 2003 Canadian Jewish Book Award for fiction and Italy's 2004 Adei Wizo Award. Nancy is the cousin of the famed Canadian writer and literary critic Mordechai Richler. She lives in Montreal.
Loading...
or
Not Currently Available for Direct Purchase