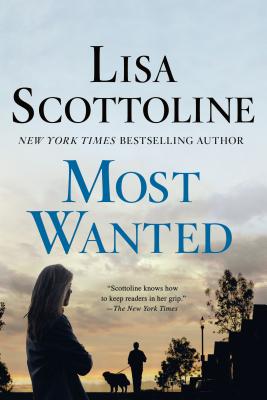 “An infertile couple decides to use a sperm donor to create the perfect family they have always wanted. When the wife sees a picture of a man who looks very similar to their donor on the evening news, the story is set in motion. Could their donor be a serial killer? Christine will stop at nothing to find out who the biological father is, even if it means the end of her marriage. This latest novel of suspense from the bestselling Scottoline is fast-paced and will keep readers guessing until the end!”
— Sarah Harmuth Letke (W), Redbery Books, Cable, WI
View the List

“Spellbinding. Another tour de force from Scottoline. It drew me in, in a single breath.” –Mary Kubica

Christine Nilsson and her husband, Marcus, are desperate for a baby. Unable to conceive, they find themselves facing a difficult choice they had never anticipated. After many appointments with specialists, endless research, and countless conversations, they make the decision to use a donor.

Two months pass, and Christine is happily pregnant. But one day, she is shocked to see a young blond man on the TV being arrested for a series of brutal murders—and the blond man bears an undeniable and uncanny resemblance to her donor.

Delving deeper to uncover the truth, Christine must confront a terrifying reality and face her worst fears. Riveting and fast-paced, with the depth of emotionality that has garnered Lisa Scottoline legions of fans, Most Wanted poses an ethical and moral dilemma: What would you do if the biological father of your unborn child was a killer?


Praise For Most Wanted…

Praise for Most Wanted

"My favorite of Scottoline's novels so far, this twisting tale should be MOST WANTED on your to-read list." – Elin Hilderbrand

"In novel after novel, Lisa Scottoline has proven herself a master of stories that combine familial love — especially that of mothers for their children — with nail-biting stories of spirited everywomen bent on finding the truth. Her new novel, Most Wanted, demonstrates again her skill with this kind of domestic suspense tale." – The Washington Post

“Scottoline’s most inventive plot to date…Most Wanted is Scottoline at her best, once again. You will want to read this novel not only for its plot, but for its warmth and humane appeal. She deals with some serious subject matter but makes it easy to read and impossible not to like.” – Huffington Post

"This is a potboiler of a book, crammed full of agonizing choices confronting appealing, relatable characters. Scottoline has penned more hardboiled tales, but never one as heartfelt and emotionally raw, raising her craft to the level of Judith Guest and Alice Hoffman. Most Wanted is a great thriller and a gut-wrenching foray into visceral angst that is not to be missed." – The Providence Journal

"A page-turner that will satisfy." – Library Journal

"A Connecticut teacher’s long-sought and hard-fought pregnancy turns into a nightmare when Scottoline unleashes one of her irresistible hooks on her." – Kirkus Reviews

“A page-turner filled with unpredictable twists…A must-read book for anyone looking for a thrilling ride from a master storyteller!” – RT Book Reviews (4 ½ stars)