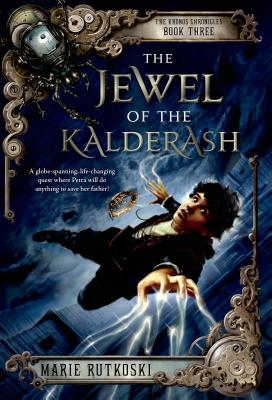 The Jewel of the Kalderash

Upon arriving in the Romany homeland to deliver the Mercator Globes, Petra Kronos, Tomik, and Neel formulate a plan to save Petra's father, who has been transformed into a Gray Man. But when a long-held secret is revealed, Neel finds himself bound to his country. The friends are quickly swept up in an epic battle for power. Thrones are at stake. Spies are afoot. Murder is common. Worst of all, Prince Rodolfo is close to becoming emperor, and ruling half of Europe.

How much is Petra willing to sacrifice to defend the people she loves? In Marie Rutkoski's The Jewel of the Kalderash, her search for answers will take her to castles and cities, through mountains, and even underwater as she tests her strength and gambles her life.


Praise For The Jewel of the Kalderash: The Kronos Chronicles: Book III…

“Bittersweet yet hopeful, with an understated romance, this is a fitting finale for a distinctive series.” —Booklist

“Thrilling, heartrending and unexpectedly sweet; Petra's adventures could not have had a more satisfying conclusion.” —Kirkus Reviews