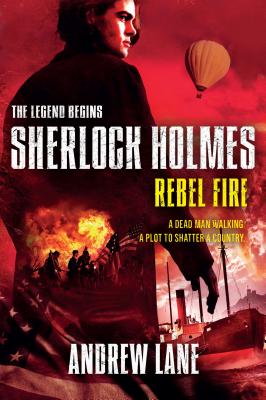 Fourteen-year-old Sherlock Holmes knows that Amyus Crowe, his mysterious American tutor, has some dark secrets. But he didn't expect to find John Wilkes Booth, the notorious assassin, apparently alive and well in England—and Crowe somehow mixed up in it. When no one will tell you the truth, sometimes you have to risk all to discover it for yourself. And so begins an adventure that will take Sherlock across the Atlantic, to the center of a deadly web—where a friend is in peril and a defeated army threatens to rise again.

Andrew Lane's exciting second case for the teenage Sherlock leads the young detective to America, straight into the heart of a shocking conspiracy.

“Fans of mystery and adventure will find much to like in this page-turner wrought with danger, adventure, and a healthy dose of logical problem solving.” —VOYA

“This intriguing look at the times and development of a much-loved character fascinates across gender lines.” —Kirkus Reviews

“A menacing villain and an unexpected twist make for a thoroughly engaging read that will keep readers turning pages.” —School Library Journal, starred review on Death Cloud, the first book of the series

“The plot takes off like a rocket, constantly building suspense.” —Kirkus Reviews on Death Cloud, the first book of the series

“Purists will applaud.” —The Wall Street Journal on Death Cloud, the first book of the series

Andrew Lane is the author of the Young Sherlock Holmes series of young adult novels, starting with Death Cloud. He has also written numerous spin-off novels based on the BBC sci-fi television series Doctor Who, as well as definitive guides to Babylon 5 and the Wallace and Grommit films, and is the author of The Bond Files: An Unofficial Guide to the World's Greatest Secret Agent. He lives in Dorset, England.