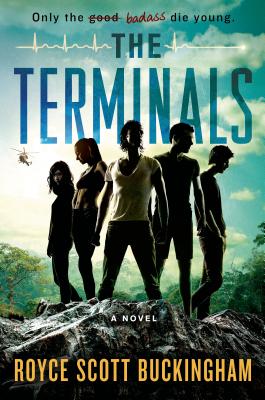 In The Terminals, Royce Buckingham tells the riveting story of a covert team of young, terminally ill teens who spend their last year alive running dangerous missions as super-spies for an organization that may not be all it seems.

When 19 year-old Cam Cody is diagnosed with a terminal illness, he expects to spend the rest of his shortened life in an adjustable bed. Then one night, a mysterious man offers Cam one chance to join a covert unit of young "terminals." They are like him, only they spend the last year of their lives executing exciting and dangerous missions to make the world a better place.

With nothing to lose, Cam is in.

A helicopter flies Cam to a secret tropical location, where he's tossed out with a parachute and an instruction manual. After a rough landing, he meets his nine teammates. The other terminals don't seem sick; Zara is beautiful, Donnie is an amazing athlete, and Calliope sings like a bird. He soon learns that they're enhanced with an experimental super steroid TS-8, which suppresses their illnesses' symptoms and heightens their physical and mental abilities. It's also fatal if taken for more than a year.

Cam joins this extreme spy team, and they begin pulling dangerous operations in multiple countries. As his teammates fall around him, he starts to receive cryptic messages from a haggard survivor of last year's class hiding in the forest. She reveals that the program isn't what it seems, leading Cam to question whether any of them are really sick at all.


Praise For The Terminals: A Novel…

“The Terminals is a great book…The action is nonstop and visual -- this book almost reads like a screenplay -- and author Buckingham keeps his prose direct and simple.” —DenverPost.com

“A new voice in youth literature.... So much action, you need to put the book down to take a breath!” —Janie Franz, MyShelf.com on Goblins!

“A page turner, deftly combining humor and suspense with just a taste of horror…. Demonkeeper is a rollicking good tale.” —Children's BookPage on Demonkeeper

“Buckingham has written an enjoyable novel that is both scary and laugh-out-loud funny…. Fast-paced and full of action and suspense.” —School Library Journal on Demonkeeper

ROYCE SCOTT BUCKINGHAM is an American author with a degree in English from Whitman College and a Juris Doctor in Law from the University of Oregon. Buckingham is the international bestselling author of Demonkeeper. The Terminals is Buckingham’s first young adult thriller for the U.S. Buckingham lives with his wife and their two sons in Bellingham, WA, where he works at the Prosecuting Attorney’s Office.
Loading...
or
Not Currently Available for Direct Purchase