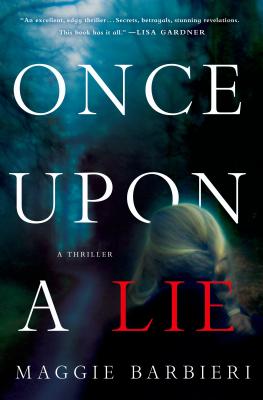 Once Upon a Lie (Hardcover)

Maeve Conlon's life is coming apart at the seams. Her bakery is barely making ends meet, and one of her daughters spends as much time grounded as the other does studying. Her ex-husband has a new wife, a new baby, and a look of pity for Maeve that's absolutely infuriating. Her father insists he's still independent, but he's slowly and obviously succumbing to Alzheimer's. And now, her cousin Sean Donovan has been found dead, sitting in his car in a public park in quiet Farringville, New York, shot through the head.

There was never much love lost between Maeve and Sean and she's not exactly devastated by his death, but suddenly the police are poking around asking the family questions. It's just one more hassle Maeve doesn't have time for, until she realizes that her father, whose memory and judgment are unreliable at best, is a suspect in the murder. Maeve is determined to clear his name, but is she prepared to cope with the dark memories and long-hidden secrets that doing so might dredge up?

Maggie Barbieri will mesmerize readers with "Once Upon a Lie," a gripping novel about family, justice, and the choices we make that define who we are.

MAGGIE BARBIERI is a freelance editor as well as a mystery novelist. Her father was a member of the NYPD, and his stories provide much of the background for her novels. She is the author of books including Murder 101, Extracurricular Activities, and Quick Study.

Praise For Once Upon a Lie…

“[A] riveting tale of ordinary cruelty and complicated heroism…All the characters are sharply drawn, particularly Maeve, whose dark humor and stoic attitude mask an unshakable moral core. The details of Maeve’s connection to Sean and Michael unravel with excruciating slowness, and Barbieri skillfully avoids tipping her hand until the last possible moment, leaving readers both breathless and unnerved by the novel’s conclusion.”
—Publisher’s Weekly (starred review)

“[Barbieri] takes readers on a dark ride through the life of an abuse survivor. This in-depth look at the daily thoughts and feelings of the heroine is intriguing. The story hooks readers until the shocking end. This reviewer is looking forward to more from this talented author.”
—RT Book Reviews (4½ stars, Top Pick)

“An excellent, edgy thriller. Maggie Barbieri breaks new ground with this provocative new novel showcasing one burnt out mother's desperate determination to protect her family's future by facing down her past. Secrets, betrayals, stunning revelations. This book has it all.”
—LISA GARDNER

“Once Upon a Lie's Maeve Conlon is a terrific heroine—funny, smart, brave and, above all, real.”
—ALISON GAYLIN

“Once Upon a Lie is a clever, spicy, humorous and insightful story of what can happen when long-suppressed memories and dark secrets are kept buried too long. Maggie Barbieri digs deep beneath the serene surface of suburbia where forbidden things happen and delivers a surprising, suspenseful and satisfying story.”
—MARY JANE CLARK