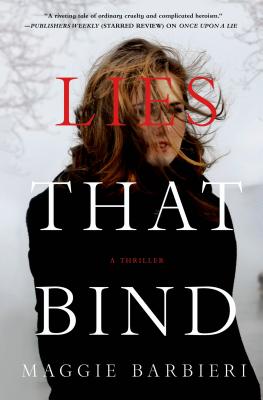 In the acclaimed Once Upon a Lie, Maggie Barbieri introduced Maeve Conlon, a single mother and bakery owner hiding dark secrets behind her cookie-cutter suburban life.

Now, Maeve's moving on with everyday life when the unthinkable happens: her father dies of a massive heart attack. Maeve's mother died when Maeve was very young, and growing up, it was always just her and her father. But on the day of his funeral, Maeve learns a shocking secret. She might have a sister she's never met. Maeve knows her father would never have kept something like that from her…Unless he thought he had to.

Meantime, someone keeps sneaking around Maeve's bakery. At first the signs are subtle, but then it becomes vandalism, and then it grows even more frightening. Could it be related to Maeve's search for her missing sister? Maeve soon decides it's time to take matters into her own capable hands. But administering her personal brand of justice is a dangerous undertaking, and between the ever-watchful eyes of her family and the lingering attention she's attracted from local police, Maeve will be forced to decide just how much she's willing to risk in the name of justice.

MAGGIE BARBIERI is a freelance editor as well as a mystery novelist. Her father was a member of the NYPD, and his stories provide much of the background for her novels.

Praise For Lies That Bind: A Thriller (Maeve Conlon Novels #2)…

“Riveting…All the characters are sharply drawn, particularly Maeve, whose dark humor and stoic attitude mask an unshakable moral core…Barbieri skillfully avoids tipping her hand until the last possible moment, leaving readers both breathless and unnerved by the novel's conclusion.” —Publisher's Weekly (starred) on Once Upon a Lie

“Grace and humor mark this tale of a woman trying to protect her family without losing herself.” —Kirkus (starred) on Once Upon a Lie

“[Barbieri] takes readers on a dark ride…The story hooks readers until the shocking end. This reviewer is looking forward to more from this talented author.” —RT Book Reviews (4½ stars, Top Pick) on Once Upon a Lie

“An excellent, edgy thriller. Maggie Barbieri breaks new ground with this provocative new novel showcasing one burnt out mother's desperate determination to protect her family's future by facing down her past. Secrets, betrayals, stunning revelations. This book has it all.” —Lisa Gardner on Once Upon a Lie

“Once Upon a Lie is a clever, spicy, humorous and insightful story of what can happen when long-suppressed memories and dark secrets are kept buried too long. Maggie Barbieri digs deep beneath the serene surface of suburbia where forbidden things happen and delivers a surprising, suspenseful and satisfying story.” —Mary Jane Clark on Once Upon a Lie

“Once Upon a Lie's Maeve Conlon is a terrific heroine--funny, smart, brave and, above all, real.” —Alison Gaylin on Once Upon a Lie

“Wow. What begins as a wry and witty suburban mystery soon becomes a darkly powerful tale of family secrets, loss, and revenge. Surprising, sinister, and quietly disturbing.” —Hank Phillippi Ryan on Once Upon a Lie