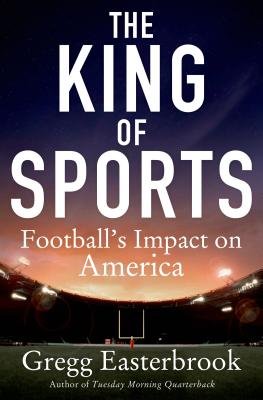 The King of Sports

Gridiron football is the king of sports – it's the biggest game in the strongest and richest country in the world. Of the twenty most-watched television broadcasts ever, both in the United States and internationally, all twenty were Super Bowls. In The King of Sports, Easterbrook tells the full story of how football became so deeply ingrained in American culture. Both good and bad, he examines its impact on American society at all levels of the game.

The King of Sports explores these and many other topics:

* The real harm done by concussions (it's not to NFL players).
* The real way in which college football players are exploited (it's not by not being paid).
* The way football helps American colleges (it's not bowl revenue) and American cities (it's not Super Bowl wins).
* What happens to players who are used up and thrown away (it's not pretty).

* The hidden scandal of the NFL (it's worse than you think).

Using his year-long exclusive insider access to the Virginia Tech football program, where Frank Beamer has compiled the most victories of any active NFL or major-college head coach while also graduating players, Easterbrook shows how one big university "does football right." Then he reports on what's wrong with football at the youth, high school, college and professional levels. Easterbrook holds up examples of coaches and programs who put the athletes first and still win; he presents solutions to these issues and many more, showing a clear path forward for the sport as a whole. Rich with reporting details from interviews with current and former college and pro football players and coaches, The King of Sports promises to be the most provocative and best-read sports book of the year.


Praise For The King of Sports: Football's Impact on America…

“The King of Sports is a fantastic book” —Chuck Todd

“Read this book with a highlighter in hand. It is the most significant book you will ever read on football.” —Brian Kenny, former anchor, SportsCenter

“The King of Sports provides a vivid, authoritative, insightful and above all provocative account of the role of football in American life.” —Michael Mandelbaum, author of The Meaning of Sports

“[Easterbrook] delivers hits more devastating than the most ferocious, head-hunting linebacker…. [he] does it again, again and again in The King of Sports, a startling and disturbing new book that takes aim at hypocrisy in the National Football League and big money college football.” —Buffalo News

“College and professional football generates billions of dollars annually in revenue. Easterbrook, the author of ESPN's popular column Tuesday Morning Quarterback, looks beyond the dollar signs, examining many of the sport's darker issues… A valuable analysis that will significantly alter the ways that readers view football.” —Booklist

“Easterbrook presents muchto consider and discuss in his diagnosis and treatment plan, which should be of interest to a broad audience.” —Library Journal, starred review

“No matter how you feel about football's issues, The King of Sports offers plenty to think about. It's a blitz of sports and cultural perspective well worth any fan's time.” —Creative Loafing Charlotte

“One of the Web's surprise cult hits.” —The New York Times on Tuesday Morning Quarterback

GREGG EASTERBROOK is the author of eight books, including The Leading Indicators, The Progress Paradox, The Here and Now and Sonic Boom. He is a contributing editor of The Atlantic Monthly and The Washington Monthly, and a columnist for ESPN.com. He has been a distinguished fellow of the Fulbright Foundation, a visiting fellow of the Brookings Institution, and a political columnist for Reuters.