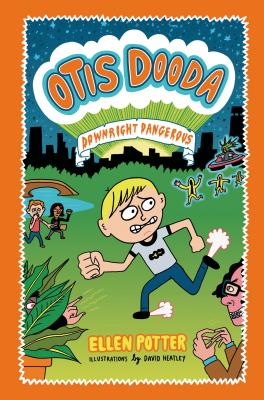 After surviving the crazy events of his first weeks in New York City, nine-year-old Otis Dooda is starting out at a brand-new school. He would love to make a good impression, but life in Tidwell Towers is never that easy. With his disgusting seatmate, the possible impending alien invasion, and the introduction of his new nemesis, Sid Frackas "The Greatest LEGO Genius Who Ever Lived" (a title Otis thought was his!), things are getting downright dangerous!

“Fans of Captain Underpants and Diary of a Wimpy Kid will enjoy the graphic novel format of this series . . . With black-and-white line drawings, large font, and gross bathroom humor, reluctant readers will gravitate toward Otis Dooda.” —School Library Journal

Ellen Potter is the author of books including The Kneebone Boy, Slob, Pish Posh, and Olivia Kidney. With Anne Mazer she is also the author of Spilling Ink: A Young Writer’s Handbook. Potter grew up in a high-rise apartment building in New York City’s Upper West Side, where she exercised her early creativity by making up stories about the neighbors she saw on the elevator. When she was 11 years old, she realized all the best books were written for people her age, and so she decided to become a children’s book author. She studied creative writing at Binghamton University, and then worked many different jobs while continuing to write. She was a dog groomer, construction worker, art teacher, and waitress. She lives in upstate New York with her husband, son and a motley assortment of badly behaved animals.

Meet David Heatley. He drew all the pictures for Otis Dooda. When he's not writing songs or playing with Legos or daydreaming, he makes art for magazines, books, and Web sites all over the world, including The New Yorker, The New York Times, and Nickelodeon Magazine.
Loading...
or
Not Currently Available for Direct Purchase