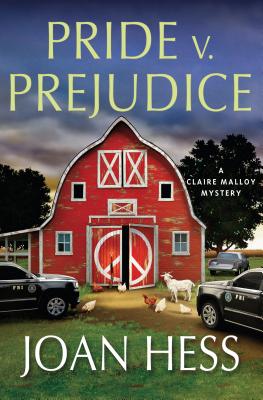 Claire Malloy, for as long as she can remember, has been the local bookseller and owner of the Book Depot and the widowed mother of teenage Caron, who frequently speaks in ALL CAPS. But her life has changed dramatically in recent years. Claire has married her longtime beau, Deputy Police Chief Peter Rosen. Still the owner of the Book Depot, Claire has passed the day-to-day running of it on to her very efficient employees. With Caron inching ever closer to college, there's but one thing that remains steadfastly unchanged—Claire's astonishing ability to attract, find, or even just randomly stumble across trouble.

Summoned for jury duty, the prosecutor on a murder case, harboring a grudge against her husband, decides to humiliate Claire and dismiss her. Having done so in spectacular enough fashion to make the local news, Claire decides that revenge will be the next dish she serves. She hunts down the defendant in the case, a woman accused of murdering her husband, and offers to help prove her innocence. And not just because Claire wants to humiliate the prosecutor. There are only two problems. One—the defendant is looking guiltier by the minute. And two—the worst day imaginable has finally come: Claire's dreaded new mother-in-law is coming to visit and life in prison is starting to look good.

“If you've never spent time with Claire Malloy and her crew, I feel sorry for you. Stop reading this nonsense and hop to it. You'll see wit and humanity all wrapped up in a nifty murder mystery.” —Harlan Coben

“Winning...Claire investigates with her usual humor and panache..” —Publishers Weekly on Murder as a Second Language

“Hess writes this series with a wickedly funny sense of humor. Anyone looking to be amused by a wildly entertaining series will have a good time.” —Mystery Scene on Out on a Limb

“Breezy and delightful...one of the most engaging narrators in mystery.” —Deadly Pleasures

“A winning blend of soft-core feminism, trendy subplots, and a completely irreverent style that characterizes both the series and the sleuth.” —Houston Chronicle on Mummy Dearest

JOAN HESS is the author of both the Claire Malloy and the Maggody mystery series. She is a winner of the American Mystery Award, a member of Sisters in Crime, and a former president of the American Crime Writers League. She lives in Fayetteville, Arkansas.
Loading...
or
Not Currently Available for Direct Purchase