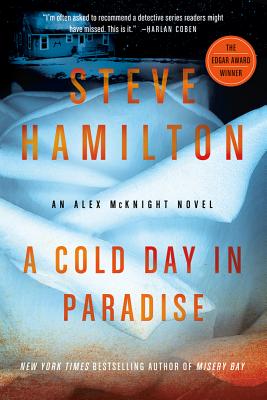 A Cold Day in Paradise

When first published, A Cold Day in Paradise won both the Edgar and Shamus awards for Best First Novel, launching Steve Hamilton into the top ranks of today's crime writers. Now, see for yourself why this extraordinary novel has galvanized the literary and mystery community as no other book before it....

Other than the bullet lodged near his heart, former Detroit cop Alex McKnight thought he had put the nightmare of his partner's death and his own near-fatal injury behind him. After all, the man convicted of the crimes has been locked away for years. But in the small town of Paradise, Michigan, where McKnight has traded his badge for a cabin in the woods, a murderer with the same unmistakable trademarks appears to be back. McKnight can't understand who else would know the intimate details of the old murders. And it seems like it'll be a frozen day in Hell before McKnight can unravel truth from deception in a town that's anything but Paradise.

“Chilling as the November wind. A must for PI and suspense fans.” —Charles Todd, author of Wings of Fire

“His story is so fundamentally sound and stylistically rounded that Hamilton ought to be teaching whatever writing course he may have taken toward producing this novel.” —Jeremiah Healy, author of The Stalking of Sheilah Quinn and The Only Good Lawyer