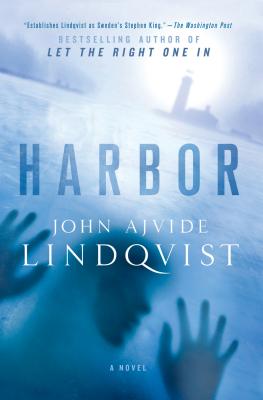 “We've had a lot of ice cold Scandinavian mystery lately, but now here is a fantastic new thriller from a Swedish master of suspense. Harbor is the story of a father's refusal to abandon his desperate search for his vanished daughter. He must search beneath the ice as well as through decades of secrets that an entire town has conspired to keep hidden. This highly complex story skips through time, each event slowly adding levels of both character and context. Original and chilling!”
— Flannery Fitch, Bookshop Santa Cruz, Santa Cruz, CA
View the List

John Ajvide Lindqvist has taken the horror world by storm. His first novel, Let the Right One In, has been made into critically acclaimed films in both Sweden and in the U.S (as Let Me In). His second novel, Handling the Undead, is beloved by horror lovers everywhere. Now, with Harbor, a stunning and chilling masterpiece, Lindqvist firmly cements his place as the heir apparent to Stephen King.

One ordinary winter afternoon on a snowy island, Anders and Cecilia take their six-year-old daughter Maja across the ice to visit the lighthouse in the middle of the frozen channel. While they are exploring the lighthouse, Maja disappears – either into thin air or under thin ice -- leaving not even a footprint in the snow.

Two years later, Anders, a broken man, moves back to his family's abandoned home on the island. He soon realizes that Maja's disappearance is only one of many strange occurrences, and that his fellow islanders, including his own grandmother, know a lot more than they're telling. As he digs deeper, Anders begins to unearth a dark and deadly secret at the heart of this small, seemingly placid town.

As he did with Let the Right One In and Handling the Undead, John Ajvide Lindqvist serves up a blockbuster cocktail of high-tension suspense in a narrative that barely pauses for breath.

“One of the hottest writers in the horror genre.” —Mystery Scene

“The third consecutive masterpiece for an author who deserves to be as much of a household name as Stephen King.” —SFX.co.uk

“A very scary tale indeed from a writer who is master of his genre.” —Financial Times (UK)

“Lindqvist gives Stephen King and John Saul at their best a run for the money.” —Library Journal (starred review), on Handling the Undead


“Sophisticated horror that takes the genre to new and exciting levels.” —Suspense Magazine, on Handling the Undead

“It is easy to compare Lindqvist to Clive Barker or Neil Gaiman.” —Dagens Noeringsliv (Norway) on Handling the Undead

“Reminiscent of Stephen King at his best.” —Independent on Sunday (UK) on Let the Right One In

John Ajvide Lindqvist is the author of Let the Right One In and Handling the Undead. Let The Right One In, his debut novel, was an instant bestseller in Sweden and was named Best Novel in Translation 2005 in Norway. The Swedish film adaptation, directed by Tomas Alfredsson, has won top honors at film festivals all over the globe, including Best Narrative Feature at the Tribeca Film Festival. An American remake, Let Me In, written and directed by Cloverfield director Matt Reeves, was released in October 2010 to rave reviews. Lindqvist grew up in Blackeberg, a suburb of Stockholm and the setting for Let the Right One In. Wanting to become something awful and fantastic, he first became a conjurer, and then was a stand-up comedian for twelve years. He has also written for Swedish television. He lives in Sweden.
Loading...
or support indie stores by buying on