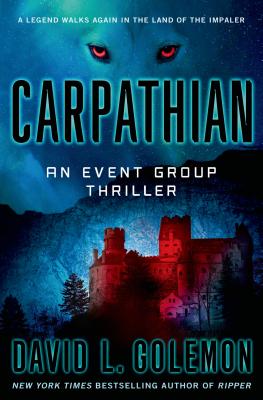 Perfect for fans of Clive Cussler, James Rollins, and Matthew Reilly, the latest gripping thriller from David L. Golemon takes the Event Group---the nation's most secret agency---to the brink in a heart-stopping race against time.

Rumors of the seemingly magical victory that allowed the Exodus of Israelites from Egypt have resonated through the archaeological world for decades. Now evidence has been discovered that points to a new explanation of how the ancient Hebrews destroyed the unstoppable army of Pharaoh with a tribe of warriors who disappeared a generation later, after the destruction of the City of Jericho, taking with them the most valued treasures of a people without a homeland.

Today a treasure of a different kind is unearthed at the lost ruins of Jericho, one that will change the history of God's Chosen People for all time the petrified remains of an animal that could not exist. Enter the Event Group. Led by Col. Jack Collins, the Group's brilliant men and women gather to discover the truth behind not only the Exodus, but also the magnificent animals that led the defeat of Pharaoh's army. On a whirlwind race to save the most valuable treasure and artifacts in the history of the world from those who would destroy them, the Event Group will come face-to-face with every myth, legend, and historical truth that has ever unfolded in the mythic and larger-than-life Carpathians---or as the area was once known, Transylvania, the land of Vlad the Impaler.

The newest pulse-pounding installment in the New York Times bestselling Event Group Series, Carpathian pushes the limits of suspense, where every chapter contains new twists and revelations in this exciting, page-turning read.

“The eighth novel in the Event Group series offers a unique spin on the Book of Exodus and the defeat of Pharaoh’s army…. The mix of legends and history has always been an asset to this series, and Golemon’s imagination seems to know no bounds. Fans of the TV series Warehouse 13 or the action-adventure novels of Cussler and Rollins will lap this up.” –Booklist

“An explosive combination that features the author’s immense imagination. It’s difficult to ground such fantastic science and weirdness in reality, but Golemon makes it look effortless . . . tense, terrifying—and worth the investment.” —Associated Press on Ripper


“Golemon knows how to make readers turn the pages, and Primeval will only further enhance his reputation.” —Booklist


“A tale worthy of the giants of the genre like Clive Cussler, James Rollins, and Matthew Reilly.”  —Megalith.com on Legend

DAVID L. GOLEMON grew up in Chino, California. He raised three great children and now makes his home in New York. Carpathian is the eighth novel in his Event Group Series.
Loading...
or
Not Currently Available for Direct Purchase