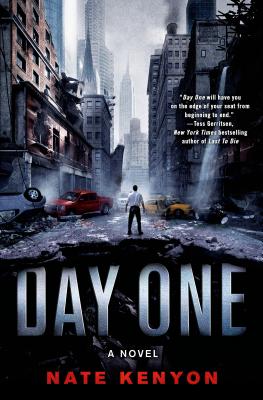 THE FUTURE IS HERE AND IT DOESN'T NEED YOU

In Nate Kenyon's "Day One," scandal-plagued hacker journalist John Hawke is hot on the trail of the explosive story that might save his career. James Weller, the former CEO of giant technology company Eclipse, has founded a new start-up, and he's agreed to let Hawke do a profile on him. Hawke knows something very big is in the works at Eclipse---and he wants to use the profile as a foot in the door to find out more.

After he arrives in Weller's office in New York City, a seemingly normal day quickly turns into a nightmare as anything with an Internet connection begins to malfunction. Hawke receives a call from his frantic wife just before the phones go dead. Soon he and a small band of survivors are struggling for their very lives as they find themselves thrust into the middle of a war zone---with no obvious enemy in sight.

The bridges and tunnels have been destroyed. New York City is under attack from a deadly and brilliant enemy that can be anywhere and can occupy anything with a computer chip. Somehow Hawke must find a way back to his pregnant wife and young son. Their lives depend upon it . . . and so does the rest of the human race.


Praise For Day One…

“Kenyon is known for his novels of horror (The Bone Factory), but this possible Armageddon scenario is his scariest to date…Kenyon takes our reliance on technology and shows in a horrific and realistic way how much our world would crumble if we had to fend for ourselves. The pace is tense and the violence a bit gruesome at times, but this thriller is a must for horror fans or readers looking to convince others to put down their smartphones.”
—Library Journal


"Day One will have you on the edge of your seat from beginning to end. A terrifying one-stop read, written by one hell of a storyteller!"
—Tess Gerritsen, New York Times bestselling author of Last to Die

"After reading this book you're never going to look, touch, or treat your computer (or anything with a smart chip in it) the same way again. You'll always wonder: is this Day One?"
—Steve Berry, #1 international bestselling author of The Jefferson Key and The Columbus Affair

"Kenyon's breakout novel and one of the year's best thrillers. A riveting, high-speed techno-apocalypse built around characters you actually give a damn about. A wild ride."
—Christopher Golden, New York Times bestselling and award-winning author of The Myth Hunters, The Shadow Saga, and Baltimore

"This is a highly imaginative thriller with solidly built characters...Exciting and inventive stuff."
—Booklist (starred review)

"In this taut thriller, Kenyon, the Bram Stoker Award-nominated author of Bloodstone and The Reach, amps up the tension and pushes the throttle as far as it will go. Full of twists and turns, Day One leaves the reader and the characters unsure of who or what they can trust. … Day One is a novel that will appeal to fans of horror, science fiction, and thrillers. Each twist leaves the reader reeling. It is one of those un-put-downable books, and I couldn’t recommend it more" —FEARnet

NATE KENYON is the author of Bloodstone, a Bram Stoker Award finalist and winner of the P&E Horror Novel of the Year, The Reach, also a Bram Stoker Award finalist, The Bone Factory, Sparrow Rock, StarCraft: Ghost Spectres, and DiabloIII: The Order. He is a member of the Horror Writers Association and International Thriller Writers. He lives in the Boston area.
Loading...
or
Not Currently Available for Direct Purchase