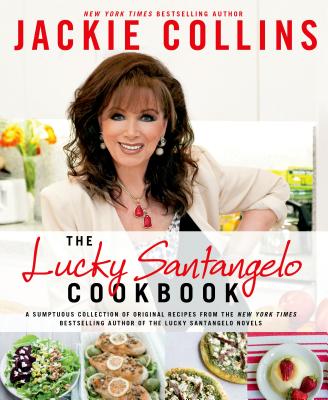 Bold, wildly beautiful, and totally her own woman, Lucky Santangelo needs no introduction. The sizzling, glamorous, sometimes dangerous daughter of former gangster Gino, Lucky is the most popular character in Jackie Collins's wild world of lust, intrigue, violence, and redemption. A true Italian/American woman of the world, Lucky likes to shake it up in the kitchen—from traditional Italian dishes to sumptuous desserts, and crazy cocktails.

The Lucky Santangelo Cookbook features the kind of bold and audacious flavors that characterize Lucky herself. From zesty meatballs to sweet and spicy spare ribs, this book is packed with recipes suitable for everything from big family dinners to lavish cocktail parties to romantic dinners for two. The Lucky Santangelo Cookbook is certain to broaden any home cook's repertoire in new and excitingly delicious directions.

Fully illustrated and peppered throughout with fun and delightfully provocative scenes written just for this book, readers will enjoy seeing Lucky—and Jackie—in action. So—if you want a little taste of Lucky Santangelo in your life—get into the kitchen and start getting Lucky!

There have been many imitators, but only Jackie Collins (1937-2015) can tell you what really goes on in the fastest lane of all. From Beverly Hills bedrooms to a raunchy prowl along the streets of Hollywood; from glittering rock parties and concerts to stretch limos and the mansions of power brokers—Jackie Collins chronicles the real truth from the inside looking out. Jackie Collins has been called a “raunchy moralist” by the late director Louis Malle and “Hollywood’s own Marcel Proust” by Vanity Fair magazine. With over 400 million copies of her books sold in more than forty countries, and with some twenty-seven New York Times bestsellers to her credit, Jackie Collins is one of the world’s top-selling novelists. She is known for giving her readers an unrivalled insider’s knowledge of Hollywood and the glamorous lives and loves of the rich, famous, and infamous. “I write about real people in disguise,” she says. “If anything, my characters are toned down -- the truth is much more bizarre.” Ms. Collins books include Poor Little Bitch Girl, A Santangelo Story and Drop Dead Beautiful. Jackie Collins was awarded an OBE by Queen Elizabeth II in 2013. She lived in Los Angeles, CA.