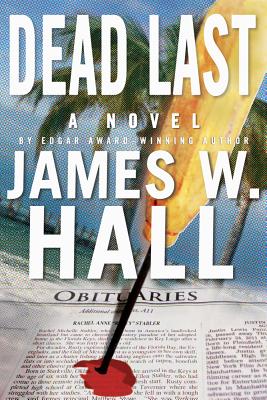 April Moss writes obituaries for the Miami Herald. Her son, Sawyer, also a writer, has been scripting a cable TV series called "Miami Ops" and has been using his mother's work as a central element of the show's storyline. In "Miami Ops," a serial killer is using obituaries published in the local paper as a blueprint for selecting his next victims.

But midway through the season, a copycat appears off-screen, a real-life killer who is using the same strategy to select victims. When this serial killer crosses paths with the reclusive Thorn, he has no choice but to leave his sanctuary in Key Largo and join forces with a young policewoman from Oklahoma who is investigating the murders.

In addition to the show's head writer, April's other son, Sawyer's twin brother, works on "Miami Ops" as the lead actor. Could one of them be involved in the killings? Or are they orchestrated by the director of the TV series, an aging mogul who badly needs a hit? And what about the female star of the show, a deliciously strange young woman who seems willing to do anything to promote her career.

Thorn walks into this hotbed of entertainment business intrigue totally unprepared for the life-altering shocker he's about to face. This loner from Key Largo has brought down his share of killers, but he's never confronted one that was his own flesh and blood.

With the pacing of a thriller, and the lyrical prose for which Hall is renowned, Dead Last pits Thorn against a killer—or killers—whose motives are as elusive as their identities.

“Dead Last is a mystery with multiple layers, with Thorn pursuing a ruthless and clever killer as well as diving into his own past -- two paths that will have a shocking convergence.” —St. Petersburg Times

“Thorn, that Key Largo loner whose renegade style always gets results, has written another page-turner, this time with a surprising twist. [...]Which, if any, of these leading suspects, is the right one? As if that weren't enough of a puzzle, Thorn gets the surprise of his life in the course of the investigation.” —Valerie Ryan, Shelf Awareness

James W. Hall is the author of eleven novels, including Blackwater Sound. He lives in Key Largo, Florida, with his wife.