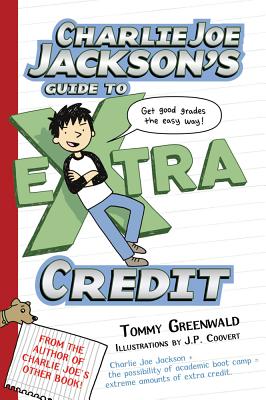 Charlie Joe Jackson, the most reluctant reader ever born, made it his mission in the first book to get through middle school without reading a single book from cover to cover. Now he's back—and trying desperately to get straight As in order to avoid going to academic camp for the summer. To do this, he will have to betray his friend, lose the girl of his dreams, and end up acting in a school play about the inventor of paper towels. Charlie Joe's not exactly the "school play kind of guy," but desperate times call for desperate measures, in Charlie Joe Jackson's Guide to Extra Credit by Tommy Greenwald.

“No middle schooler wants to face a month at summer enrichment camp, but many will enjoy watching Charlie Joe work harder than he has ever worked before to avoid it…even if he fails.” —Kirkus

“Sure to appeal to reluctant readers who will identify with Charlie Joe's knack for avoiding reading and schoolwork, this title would also make a fabulous read-aloud. Luckily for fans of Charlie Joe, another installment in this unlikely hero's life is forthcoming.” —School Library Journal

JP Coovert lives in Cincinnati, Ohio where he uses his time making as much rad artwork as possible. On the side, he co-runs a record and comic label called One Percent Press. He's written and drawn almost 50 comics, including his ongoing series, Simple Routines. JP Wants to create cool stuff forever, like illustrating every animal on the planet, creating a library full of kids books, and painting a mural on the moon!
Loading...
or support indie stores by buying on