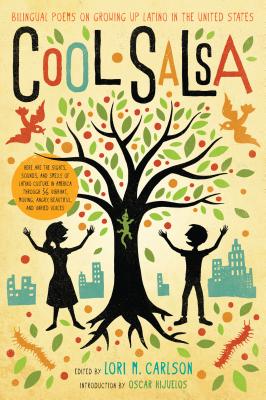 Bilingual Poems on Growing Up Latino in the United States

Here are poems about families and parties, insults and sad memories, hot dogs and mangos, the sweet syllables of Spanish and the snag-toothed traps of English. Here is the glory—and pain—of being Latino American.

Latino Americans hail from Cuba and California, Mexico and Michigan, Nicaragua and New York, and editor Lori M. Carlson has made sure to capture all of those accents. With poets such as Sandra Cisneros, Martín Espada, Gary Soto, and Ed Vega, and a very personal introduction by Oscar Hijuelos, this collection encompasses the voices of Latino America. By selecting poems about the experiences of teenagers, Carlson has given a focus to that rich diversity; by presenting the poems both in their original language and in translation, she has made them available to us all.

As you move from memories of red wagons to dreams of orange trees to fights with street gangs, you feel Cool Salsa's musical and emotional cross rhythms. Here is a world of exciting poetry for you, y tú también.


Praise For Cool Salsa: Bilingual Poems on Growing Up Latino in the United States…

“This spirited, significant collection of poetry for young adults by poets of Latin American heritage is enlivened both by the considerable energy of the poems and by the juxtaposition--and sometimes intermingling--of English and Spanish. ... The collection is eminently successful in celebrating the particular experience of growing up Latino in the United States.” —The Horn Book, starred review

Oscar Hijuelos was born of Cuban parentage in New York in 1951 and graduated from City College with a master's in creative writing, studying under the likes of Susan Sontag, Donald Barthelme, and William S. Burroughs. His first novel, Our House in the Last World, was published in 1985. In 1990 he became the first Hispanic writer to be awarded the Pulitzer Prize for Fiction. He is also the recipient of the Rome Prize in Literature from the American Academy in Rome, an Ingram Merrill Foundation Award, and the Hispanic Heritage Award for Literature, along with several grants from the Guggenheim Foundation and the National Endowment for the Arts. He wrote eight novels which, have been translated into more than twenty-five languages. He passed away in 2013.
Loading...
or support indie stores by buying on