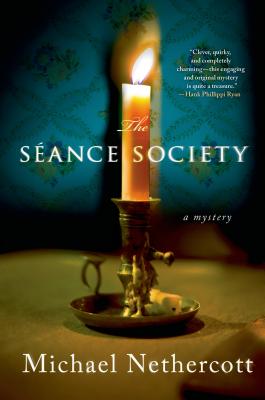 It's 1956, and Lee Plunkett has taken over the family business as a private investigator despite his reluctance to follow in his father's footsteps. When murder intrudes on a group of ghost seekers, Lee is asked to solve the case by a cop on the verge of retirement. At the urging of his perpetual fiancee Audrey, Lee enlists the help of Mr. O'Nelligan, a scholarly Irishman with a keen eye for solving mysteries. The duo is drawn into a murder investigation involving the "Spectricator," a machine designed to communicate with the dead. Soon, Plunkett and O'Nelligan are knee-deep in a suspect pool that includes a surly medium, a former speakeasy queen, a mysterious Spanish widow, and a whole slew of eccentric servants. Engaging, charming, and smart, "The Seance Society "by Michael Nethercott is a fresh take on the traditional mystery genre for readers who love original characters, witty dialogue, and a great whodunit.

"Nethercott's debut sparkles with a mix of W.B. Yeats and Elvis quotations, well-placed red herrings, and an endearing trio of protagonists." "Library Journal"

"This clever series opener offers a mid-century take on the traditional drawing-room mystery There is a sweet charm to this mystery, ensuring that readers will want to see more from O'Nelligan and Plunkett." "Booklist"


Praise For The Seance Society: A Mystery…

“Michael Nethercott’s nicely put together whodunit, The Séance Society, plunges us head first into that warm bath of nostalgia with its setting — a small town in Connecticut in 1956. The methodically constructed narrative is as neat as its locale, a classic puzzle pegged to the murder of a flamboyant entrepreneur who sponsors séances in what everyone knows to be a haunted house.”
--Marilyn Stasio, The New York Times

"Intriguing and suspenseful…The first sentence sets  the tone for the book:  Heed well the  dead, for they hover at our ears.”
—Irish American News

"A pleasantly retro whodunit in which otherworldly spirits compete for attention with flesh-and-blood types."
—Kirkus Reviews

"Mad-cap and mid-century—what a treat! You’ll love the reluctant-detective Plunkett and the endearing Mr. O’Nelligan. Clever, quirky and completely charming—this engaging and original mystery is quite a treasure."
—Hank Phillippi Ryan, Agatha, Anthony and MacavIty winning author of The Other Woman

“A unique ‘Watson’ and a nicely captured 1950s atmosphere. It will be enjoyed by lovers of the well-plotted and well-written mystery.” —John Curran, Agatha Award-winning author of Agatha Christie's Secret Notebooks

"A charming debut novel. Nethercott is a talented writer who, in Lee Plunkett and Mr. O'Nelligan, has confected a likeable and entertaining detective duo for whom, we hope, many more mysteries await." —Chuck Greaves, author of Hush Money

MICHAEL NETHERCOTT's work has appeared in numerous magazines and anthologies including Alfred Hitchcock Mystery Magazine, Best Crime and Mystery Stories of the Year, Gods and Monsters, and Crimestalkers Casebook. He is a past winner of The Black Orchid Novella Award, The Vermont Playwrights Award, and The Nor'easter Play Writing Contest. He lives with his wife in Guilford, Vermont.
Loading...
or
Not Currently Available for Direct Purchase