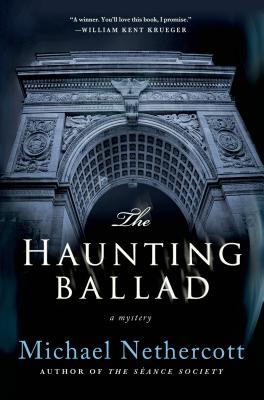 A Mystery (O'Nelligan and Plunkett #2)

The Seance Society introduced mystery lovers to Mr. O'Nelligan and Lee Plunkett, an unlikely pair of sleuths on an equally unlikely case with a supernatural twist.
Having taken over his father's PI business, Lee enlists O'Nelligan, a dapper Irishman with a flair for solving mysteries, to help catch a killer. Now, in Michael Nethercott's The Haunting Ballad, this sleuthing "odd couple" are back in another witty, charming, and wonderfully written mystery, this time set in 1957 in the burgeoning music scene of New York City's Greenwich Village.

It's the spring of 1957, and O'Nelligan and Plunkett are summoned to New York to investigate the death of a controversial folk song collector. The trail leads the pair to a diverse group of suspects including an eccentric Beat coffee house owner, a family of Irish balladeers (who may be IRA), a bluesy ex-con, a hundred-and-five-year-old Civil War drummer boy, and a self-proclaimed "ghost chanter" who sings songs that she receives from the dead. To complicate matters, there's a handsome, smooth-talking young folk singer who Lee's fiancée Audrey is enthralled by. And somewhere in the Bohemian swirl of the Village, a killer waits...


Praise For The Haunting Ballad: A Mystery (O'Nelligan and Plunkett #2)…

“In his rollicking second outing with the sleuthing duo of Plunkett and O'Nelligan, Nethercott offers readers a wonderfully entertaining spin on the classic PI genre. Set in the Greenwich Village of the early beat era, rich with fascinating, detailed references to that time and place, and featuring two of the most mismatched and delightful protagonists you're likely to stumble upon these days, The Haunting Ballad is, in every respect, a winner. You'll love this book, I promise.” —William Kent Krueger, New York Times-bestselling author of Ordinary Grace

MICHAEL NETHERCOTT is the author of The Seance Society and The Haunting Ballad. His work has appeared in numerous magazines and anthologies including Alfred Hitchcock Mystery Magazine. He is a past winner of The Black Orchid Novella Award and was nominated for the Shamus Award for a short story introducing O'Nelligan and Plunkett. He lives with his family in Vermont.
Loading...
or
Not Currently Available for Direct Purchase