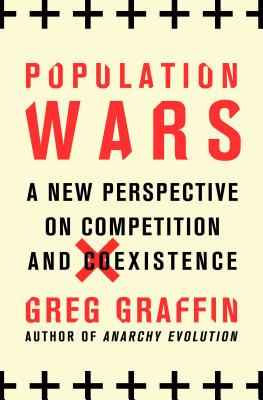 A New Perspective on Competition and Coexistence

From the very beginning, life on Earth has been defined by war. Today those first wars continue to be fought around and inside us, influencing our individual behavior and that of civilization as a whole. War between populations—whether between different species or between rival groups of humans—is seen as an inevitable part of the evolutionary process. The popular concept of survival of the fittest explains and often excuses these actions.

In Population Wars, Greg Graffin points to where the mainstream view of evolutionary theory has led us astray. That misunderstanding has allowed us to justify wars on every level, whether against bacterial colonies or human societies, even when other, less violent solutions may be available. Through tales of mass extinctions, developing immune systems, human warfare, the American industrial heartland, and our degrading modern environment, Graffin demonstrates how an oversimplified idea of war, with its victorious winners and vanquished losers, prevents us from responding to the real problems we face. Along the way, Graffin reveals a paradox: When we challenge conventional definitions of war, we are left with a new problem—how to define ourselves.

Population Wars is a paradigm-shifting book about why humans behave the way they do and the ancient history that explains that behavior. In reading it, you'll see why we need to rethink the reasons for war, not only the human military kind but also Darwin's "war of nature," and find hope for a less violent future for mankind.


Praise For Population Wars: A New Perspective on Competition and Coexistence…

“We are living in what may be the most important time in our species' history, in which we have become at once both the stewards of the earth and its millions of species and delicate ecosystem, and its potential demise through the population wars. As Greg Graffin demonstrates in this important call to action, the decision is ours to make on what we will do next-continue business as usual or take the next step in our moral evolution to create a sustainable world. Through compelling examples and page-turning storytelling, Graffin shows how we got here and what we can do about it, both individually and collectively.” —Michael Shermer, publisher of Skeptic magazine, monthly columnist for Scientific American, and author of The Moral Arc

“This brilliant and far-reaching tour of conflict and cooperation is led by a naturalist with an eye on the big picture. It will forever change the way you think about human conflict. Graffin is a talented science communicator who makes complex concepts accessible to all. The more we hear from him, the better.” —Guy P. Harrison, author of Good Thinking: What You Need to Know to be Smarter, Safer, Wealthier, and Wiser

"[Graffin] explains how evolution can be a guide to life."—Scientific American on Anarchy Evolution

"Take one man who rejects authority and religion and leads a punk band. Take another man who wonders whether vertebrates arose in rivers or in the ocean and is fascinated by evolution, creativity, and Ice Age animals. Put them together, and what do you get? Greg Graffin and this uniquely fascinating book."—Jared Diamond, author of Gun, Germs, and Steel on Anarchy Evolution

GREG GRAFFIN is the lead singer and a songwriter in Bad Religion. He obtained his PhD in zoology at Cornell University and a masters in Geology from UCLA. He has lectured at UCLA and Cornell and is the author of Population Wars and the coauthor of Anarchy Evolution, with Steve Olson. He received the Bryan Patterson Prize from the Society of Vertebrate Paleontology, the Rushdie Prize from the Harvard University Humanist Chaplaincy, the American Humanist Association Arts Award, and the Sapio Prize from the International League of Non-Religious and Atheists. He travels regularly between the cities he considers home, Ithaca, New York, and Los Angeles, California.
Loading...
or
Not Currently Available for Direct Purchase