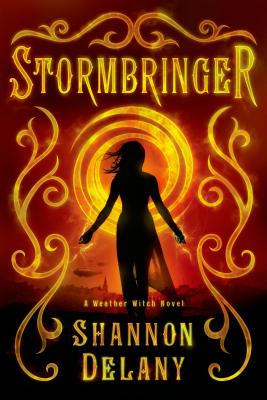 In the intrigue-filled follow up to "Weather Witch, " Jordan Astraea, once a young Philadelphia lady of good social standing, is now in the final stages of her brutal training to become a Conductor the Weather Witch who serves as a living battery to keep the massive airliner Artemesia aloft. Meanwhile, Rowen, determined to rescue her after losing his only other true friend and being wanted for murder, has found himself forced aboard a much different air vessel, this one manned by a dangerous crew and carrying a cargo so treasonous, that, if finding its destination, will herald a storm of revolution for the still young United States.

With a spirit for adventure, romance, fantastic world building and cunning imagination, Shannon Delany delivers the sensational follow up to "Weather Witch" in "Stormbringer," the second book of the trilogy.

Since she was a child SHANNON DELANY has written stories, beginning writing in earnest when her grandmother fell unexpectedly ill. Previously a teacher and now a farmer raising heritage livestock, Delany lives and writes in Upstate New York and enjoys traveling to talk to people about most anything. She is the author of the 13 to Life and Weather Witch series.
Loading...
or
Not Currently Available for Direct Purchase