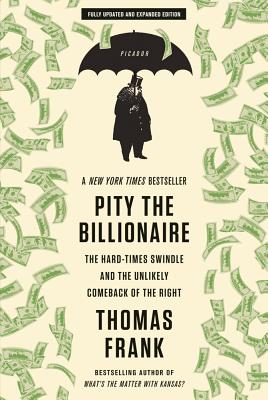 The Hard-Times Swindle and the Unlikely Comeback of the Right

From the bestselling author of What's the Matter with Kansas?, this witty and highly provocative book asks a simple question: How is it possible that the disastrous collapse of the free market economy in 2008 could have heralded a popular revival—of the right?

In Pity the Billionaire, a brilliant, funny, and disturbing tour de force, Thomas Frank analyzes the sleight of hand involved in the right's resurgence—all the upside-down grievances that have transformed economic suffering into valentines for the rich and powerful. This great chronicler of American paradox dissects the contradictions at the heart of the country's politics, and in this "dazzling" book once again shows himself as "one of the best left-wing writers America has produced" (The Guardian).


Praise For Pity the Billionaire: The Hard-Times Swindle and the Unlikely Comeback of the Right…

“Thomas Frank is the thinking person's Michael Moore. If Moore, the left-wing filmmaker, had Frank's Ph.D. (in history from the University of Chicago), he might produce books like this one.” —Michael Kinsley, The New York Times Book Review

“A feisty and galvanizing book… This is the kind of analysis - historically astute, irreverent and droll - that makes Frank such an invaluable voice....Pity the Billionaire is further evidence that he's as good at this as any writer working today.” —San Francisco Chronicle

“Frank's wit is as sharp as ever, and his eye for detail and his ability to capture a scene reminded me of reading zoologist Dian Fossey on a group of strange political primates.” —The Washington Post