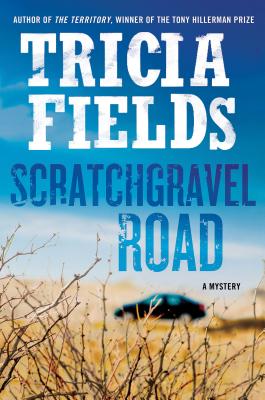 It was pure luck that Josie Gray spotted Cassidy Harper's car, abandoned on the side of the road. If she hadn't, then she'd never have found Cassidy, lying nearly dead of heatstroke on the desert sand beside the body of a Mexican immigrant. But Cassidy can't explain why she was out for a walk in the midday desert heat, let alone how she happened upon the corpse. And once Josie sees the ominous wounds on the man's body, she knows she needs to find the answer fast, before her own life is in danger.

Tricia Fields's "The Territory "marked her as talented new author of Southwestern crime, and "Scratchgravel Road "marks an inventive new mystery set in the unique world of smalltown Texas.

“Captivating. … Fields deftly balances the intriguing intimate relationships among her characters with the broader themes of industrial corruption and greed. With her wild desert settings and her thrilling plot, Fields' novel is situated somewhere between Western terrain and mystery territory.”

“Full of nonstop action … Fields’s second crime novel will be a sure hit with mystery fans who miss the late Hillerman and readers who love contemporary Westerns.”

“Noteworthy for the delineation of the west Texas desert country and the well-drawn cast of characters; Josie Gray is a protagonist worth following.”

“Fields sounds a warning on industrial dangers and their wide-ranging effects on ordinary people in this engrossing follow-up to her Hillerman Prize–winning debut, The Territory. … A tense climax with a flood, mudslide, explosives, and a possible murderer add to the suspense.”

“This author was born in Hawaii and lives in Indiana, but she's earned a spot as an honorary Texan. Her series featuring police chief Josie Gray vividly brings Artemis, a West Texas border town, to life.”

“Some readers might think they have the mystery figured out early on, but they should keep reading. Fields has a couple surprises in store.”

“Scratchgravel Road is a fast-paced, action-packed mystery that is quite frightening.  … Tricia Fields has ripped the headlines from today's newspapers, created an intense, fast-paced plot, and fleshed it out with realistic characters, both good and bad. Highly recommended for mystery lovers who crave a lot of action and drama, Scratchgravel Road will take readers on an unforgettable journey”

TRICIA FIELDS lives in a log cabin on a small farm with her husband and two daughters. She was born in Hawaii but has spent most of her life in small town Indiana, where her husband is a state trooper. She won the Tony Hillerman Prize for her first mystery, The Territory, which was also named a Sun-Sentinel Best Mystery Debut of the Year.
or
Not Currently Available for Direct Purchase