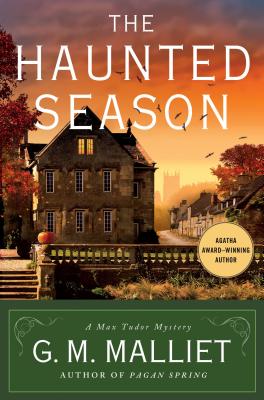 "A Demon Summer makes the case that Malliet may be the best mystery author writing in English at the moment (along with Tana French). She's certainly the most entertaining," raved The Cleveland Plain Dealer about the fourth Max Tudor Mystery.

Now, in The Haunted Season, something sinister is stirring at Totleigh Hall, the showcase of the English village of Nether Monkslip. Usually, the Lord and Lady of the manor are absent—high tax rates, it is murmured with more than a trace of envy, force them to live on the continent for most of the year. But Lord and Lady Baaden-Boomethistle have been in residence for some weeks now, and the villagers are hoping for a return to the good old days, when the lord of the manor sprinkled benefits across the village like fairy dust. Max Tudor also looks forward to getting better acquainted with the famous family that once held sway in the area. But a sudden, macabre death intervenes, and the handsome vicar's talent for sorting through clues to a murder is once again called into play in this charming and clever novel.


Praise For The Haunted Season: A Max Tudor Mystery (A Max Tudor Novel #5)…

"An excellent series... The book is titled 'The Haunted Season' for a reason..." —Mercury News

“A classic and ingenious whodunit laced with clues for the alert reader, A Fatal Winter out-Christies Christie. Pray you don't miss it.” —Richmond Times-Dispatch on A Fatal Winter

“Malliet may be the best mystery author writing in English at the moment (along with Tana French). She's certainly the most entertaining...” —Cleveland Plain Dealer

“A superb novel! Rarely have I read descriptions that have left me gasping, in both their hilarity and their painful truth. A wonderful read.” —Louise Penny on Wicked Autumn

“Highly entertaining… Wry humor permeates A Demon Summer. After all, haven't most of us thought that fruitcakes were, in some way, lethal? Yet Malliet also weaves in a serious subplot about families, devotion and the reasons that attract some people to a near cloistered life. Each visit to Nether Monkslip with its mix of eccentric and ordinary residents has been a delight. A Demon Summer pays tribute to the village mystery while showing its relevance to modern times.” —Associated Press on Demon Summer

“With clever plotting that draws on classic elements of the British village mystery, characters conceived with care, an evocative setting and frequent doses of humor to leaven the inevitable sadness, Malliet continues her elegant and entertaining series, one that discerning fans of the genre will find stimulating, rewarding — and a ton of fun.” —Richmond Times-Dispatch on Demon Summer

“I'm a fan of G.M. Malliet, and A Demon Summer is more of a return to the roots of the series. Father Max Tudor, former MI5 operative turned Anglican priest, must visit Monkbury Abbey at the order of his bishop. A peer has been poisoned, though not fatally, by a fruitcake prepared by the Handmaids of St. Lucy, a contemplative order. Just when Max is concluding the poisoning was accidental, one of the visitors to the Abbey is done to death. Once again, Max must find the killer . . . this time so he can home to his handfasting to the pregnant Awena.” —Charlaine Harris on A Demon Summer

“Entertaining . . . the ending with a traditional gathering of the subjects will please Golden Age fans.” —Publishers Weekly on A Demon Summer

“Well crafted and entertaining, this is a superb winter read.” —Crimespree on A Fatal Winter

“A traditional English mystery involving a small village, a dysfunctional family and an attractive vicar can't help but appeal to mystery lovers everywhere.” —Fresh Fiction on A Fatal Winter

“Takes the traditional English cozy mystery and plants it firmly into the twenty-first century.” —New York Journal of Books on Wicked Autumn

“Provid[es] the sort of comfort a quintessential cozy can offer.” —Kirkus on Wicked Autumn

“Malliet has mastered the delights of the cozy mystery so completely that she seems to be channeling Agatha Christie.” —Booklist, starred review on Wicked Autumn

“This appealing first in a new cozy series from Agatha-winner Malliet introduces Max Tudor....Readers will look forward to seeing more of the Rev. Tudor.” —Publishers Weekly on Wicked Autumn

“Intelligent, charming writing make this a standout and a return to the traditional English village mystery.” —Charlaine Harris, author of the True Blood series, on Wicked Autumn

G. M. MALLIET's Death of a Cozy Writer received the Agatha Award for Best First Novel and was named one of the best books of 2008 by Kirkus Reviews. It went on to earn nominations for Anthony, Macavity, and Left Coast Crime awards. The first books in the Max Tudor series—Wicked Autumn, A Fatal Winter, Pagan Spring, and A Demon Summer—also were nominated for the Agatha Award. She and her husband live in Virginia and travel frequently to the UK, the setting for many of her stories.
Loading...
or
Not Currently Available for Direct Purchase