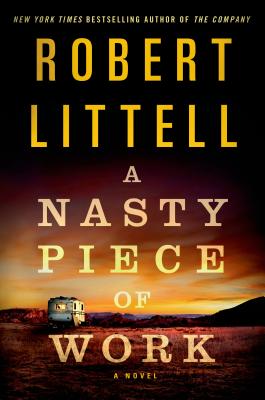 Into his life comes Ornella Neppi, a thirty-something woman making a hash out of her uncle's bail bonds business. The source of her troubles, Emilio Gava, was arrested for buying cocaine. Ornella has reason to believe he is planning to jump bail. Unless she can find him, her uncle is going to be $125,000 out of pocket.

For $95-a-day plus expenses (not to mention the pleasure of her company), Gunn agrees to help Ornella track the wayward suspect down. Curiously, no photographs of Gava seem to exist. Once Gunn begins his manhunt, he starts to wonder whether Gava himself existed in the first place.
Robert Littell has been widely praised as one of the best espionage writers of our time. Now, he's turned his formidable skills toward crime fiction in "A Nasty Piece of Work," a novel that "Le Monde "has already praised as "one of those page-turning detective tales that feels like an instant classic. A Chandleresque noir novel, as delightful as it is suspenseful.


Praise For A Nasty Piece of Work…

International Praise for A Nasty Piece of Work


“Brainy when it needs to be, arch at every conceivable opportunity and good-natured withal. It’s a pleasure to see Littell, who’s always seemed kind of tightly wound, relax a bit and invite readers along for the ride.” —Kirkus Reviews


“Littell certainly proves with this book that he can delve into the crime realm just as easily as the spy game universe he usually writes about.” —Suspense Magazine

"I want to rave about the plot, but I don't want to spoil any of it for you. But then, Littell is so gifted a creator of intelligent entertainment that I could give away almost everything and still not spoil your pleasure in reading this neat, new genre novel by one of our best." —Alan Cheuse, NPR

“Robert Littell is a master of the delicate art of storytelling. He has produced a first-rate homage to the great Chandleresque detective novel. Humor and melancholaly are on the agenda.” —L’Express

“The well-paced plot, full of clever twists, keeps us in suspense right up to the last sentence (yes, the last sentence). Certain pages, in particular those about the U.S. intervention in Afghanistan, are like so many uppercuts to our complacency. A Nasty Piece of Work opens the reader’s eyes, with its subtle and deceptively light-hearted take on universal themes.” —Juror’s report, Readers’ Grand Prix, L’Express Magazine

“A detective novel with a nostalgic tone (Bogart is not far off!), a wonderful plot, and a surprise ending that leaves the reader happy to have spent time with its wise-cracking hero. Written in a world-weary but enjoyable style, the author is clearly eager and probably amused to sweep us up into an adventure with a beauty named Friday.” —Juror’s report, Readers’ Grand Prix, L’Express Magazine

“Humor is the main ingredient. Littell loves digressions, crazy details, short silences. From time to time, there is a touch of melancholy, as when he evokes memories of war. … Somewhere, Raymond Chandler is rubbing his hands together in glee. He is in no danger of being forgotten. The fact that a writer of Littell’s stature is paying homage to him can only make him blush with pleasure.” —Le Figaro

“Robert Littell is the author of bestsellers read the world over, set in very different universes. … In his new ‘Chandleresque’ novel, we meet a femme fatale, an Afghanistan veteran living in a mobile home in New Mexico, and some quite irresistible characters in supporting roles.” —Télérama

“A Nasty Piece of Work? Pure pleasure…. A totally different and absolutely superb book, a treat to be savoured on a sandy beach, a real old-fashioned noir novel. The couple of the older detective and the young ‘barefoot contessa’ works perfectly in this novel filled with irony, humor, and sensuality.” —La Libre Belgique

“Narrated by this funny, erudite, romantic and nostalgic hero, the story plunges the reader into the scorching heat of the Nevada desert…an exercice de style to be devoured on a torrid summer night, with a glass of Southern Comfort close to hand. The ferocious if somewhat beat-up humanity of this ‘Last of the Mohicans’ is hard to resist … and as one reads the final pages one cannot help hoping that Littell will soon be giving Gunn another occasion to take some hard knocks.” —Le Matin de Lausanne

Past Praise for Robert Littell

“One of those writers, like Elmore Leonard, who have risen far above genre . . . One of the most talented, most original voices in American fiction today, period.” —The Washington Post

“If Robert Littell didn’t invent the spy novel, he should have.” —Tom Clancy

“Psychologically interesting thrillers that rival in their intensity and the delivery of their plots the best work of John le Carré.” —Chicago Tribune

“Arguably, along with le Carré and Alan Furst, one of the best three or four espionage writers alive.” —Boston Globe

“The American master of literary espionage.” —The Independent (UK)

“The nearest thing America has to a John Le Carre.” —Birmingham Post (UK)

“Littell has carved an ever growing niche for himself as one of the most literate spy plotters around.”

ROBERT LITTELL is the author of seventeen previous novels, most recently Young Philby, and the nonfiction book For the Future of Israel, written with Shimon Peres, president of Israel. He has been awarded both the English Gold Dagger and the Los Angeles Times Book Prize for his fiction. His novel The Company was a New York Times bestseller and was adapted into a television miniseries. His novel Legends, currently being made into a television series by Twentieth Century Fox Television, will air on TNT. He makes his home in France.
Loading...
or
Not Currently Available for Direct Purchase