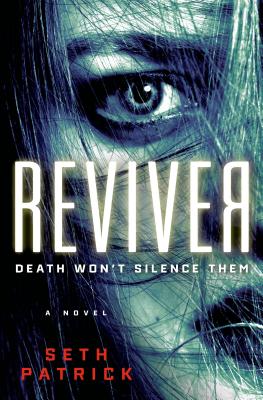 JONAH MILLER, REVIVER. Able to wake the recently dead for testimony that is accepted in courts worldwide, the use of revivers has long been a routine part of police investigation. But now those who consider it blasphemy are in resurgence - well-funded and gaining ground, they threaten the work of Jonah and his colleagues in the Forensic Revival Service.

Jonah is still recovering from the injuries received after unearthing the existence of a creature bent on terrible destruction, a creature defeated at the cost of many lives. Then the discovery of a bizarrely mutilated corpse makes Jonah suspect that the victory was not as complete as it seemed, and that not all the evil was destroyed.

For in the darkness, shadows are waiting. And they are hungry . . .

SETH PATRICK was born in Northern Ireland. An Oxford mathematics graduate, he works as a programmer in an award-winning game company. He lives in England with his wife and two young children. Reviver is his first novel.

Featured by The Sunday Times (UK), Reviver has been selected as one of 2013's most exciting new releases by Stylist (UK)!

“Supernatural thrillers don’t get much better than British author Patrick’s assured debut, the first in a trilogy…Patrick has carefully thought through the implications of this phenomenon, including religious objections and insurance issues, and maintains the suspense throughout.”
—Publishers Weekly (starred review)

“This is a gutsy book…Jonah himself [is] a lead character who has what it takes to anchor a genre-bending series. An interesting debut.”
—Booklist

"A skillfully plotted and compulsively readable supernatural thriller"
—The Guardian

“The first of what promises to be a terrific trilogy. A superbly fleshed-out cast of characters, including Jonah’s amiable friend and revivalist technician Never Geary, add ballast to a story which gives us some brilliantly spooky moments, melds crime and the paranormal in a cracking, page-turning thriller and asks serious moral questions about the exploitation of the bereaved. An impressive, intelligent and exciting debut.”
—Lancashire Evening Post

"A thrilling high-concept book that crosses numerous genres. Chilling and emotional in all the right places"
—Mark Charan Newton, author of the Legends of the Red Sun series

“A highly original story skilfully told, a thriller that twists and turns all the way to the end.”
—Simon Kernick, author of A Good Day to Die

“Patrick has created an entire forensic discipline, all backed up with authentic (at least, to this non-scientist) and utterly believable detail. I was completely absorbed by the weird take on the world he has created between the covers of this book. Heartily recommended.”
—Susan Moody reviewing for promtingcrime.blogspot.com