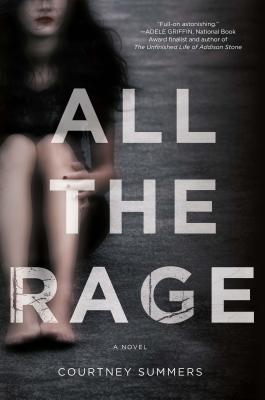 Named a "Best Book of 2015" by Bustle, Book Riot, Chicago Public Library, Quill and Quire, and the B&N Teen Blog!

The sheriff's son, Kellan Turner, is not the golden boy everyone thinks he is, and Romy Grey knows that for a fact. Because no one wants to believe a girl from the wrong side of town, the truth about him has cost her everything-friends, family, and her community. Branded a liar and bullied relentlessly by a group of kids she used to hang out with, Romy's only refuge is the diner where she works outside of town. No one knows her name or her past there; she can finally be anonymous. But when a girl with ties to both Romy and Kellan goes missing after a party, and news of him assaulting another girl in a town close by gets out, Romy must decide whether she wants to fight or carry the burden of knowing more girls could get hurt if she doesn't speak up. Nobody believed her the first time-and they certainly won't now-but the cost of her silence might be more than she can bear.

With a shocking conclusion and writing that will absolutely knock you out, Courtney Summers' new novel All the Rage examines the shame and silence inflicted upon young women in a culture that refuses to protect them.


Praise For All the Rage: A Novel…

“Around these twin mysteries runs a tight, unrelenting plot that brings into sharp, brutal relief the difference between reviled Romy and a girl who suffers ‘a fate no one thinks she deserves.' Tough, weary, hurt and scared, Romy makes believably flawed choices, sometimes hurting others and herself. The small, close-knit town of Grebe is a seething cauldron of grudges and loyalties, and each character is not only carefully drawn, but deeply rooted in generations of history. Unflinching and powerful.” —Kirkus Reviews (starred review)

“The narrative never shies from its charged subject, and Summers (This Is Not a Test) portrays the unforgiving mind-set of Grebe's citizens with grim realism. Through its resolution is neither tidy nor simple, Romy's powerful story creates a space for change.” —Publishers Weekly (starred review)

“Rape culture, class prejudice, and bullying are all handled sensitively and powerfully in this novel… Readers will definitely be compelled to find out whether Romy breaks free from her demons or implodes from the pressure.” —Voya Magazine

“With a plot that will leave you breathless and characters that will sink into your heart and stay there, it is Summers' ability to take on a painful subject with both nuance and stinging clarity that is the devastating genius of this narrative. All the Rage is full-on astonishing--and will be critical to future conversations about young adult literature. ” —Adele Griffin, author of The Unfinished Life of Addison Stone

“Powerful and heartbreaking - Romy and her story will stay with you long after you've turned the last page.” —Kody Keplinger, author of The DUFF (Designated Ugly Fat Friend)

“There are good books. There are great books. And then there are books like All The Rage, which take a piece of your heart and won't let go.” —Elizabeth Scott, author of Living Dead Girl

“All The Rage is a visceral indictment of rape culture and its far-reaching consequences and Romy is an incredibly strong and compelling character. Her story should be shared with both our daughters and our sons.” —Rachel Vincent, New York Times bestselling author of The Unbound series and The Stars Never Rise

“A Courtney Summers' novel always has wonderfully uncompromising characters and relationships. All the Rage was no exception.” —Melina Marchetta, Printz Award-Winning author of Jellicoe Road

“The kind of novel that breaks you apart, and doesn't care if it puts you back together again. It's a story about hard choices and about the tumult of being a teenager. Sharp writing shot through with a soft vein of sadness. Courtney Summers doesn't flinch, and neither should you. Read this book.” —Chuck Wendig, author of Blackbirds and Mockingbird

“In All the Rage, Courtney Summers gives a voice to countless teenage girls our society has turned our back on-the ones so many of us try to ignore. With a confident, fearless, incisive, and even compassionate heart, Summers allows these girls to be seen and heard again. A YA game changer along the lines of Laurie Halse Anderson's Speak, this is a work of great power and resonance and I believe it can give a new generation of teen girls a voice.” —Angie Manfredi, Head of Youth Services, Los Alamos County Library System, NM

“Summers takes victim-shaming to task in this timely story, and the cruelties not only of Romy's classmates but also the adults she should be able to trust come heartbreakingly to the fore. Romy's internal monologue is breathy and filled with bitter indignation, and while the narrative style may require some patience, older teens who like gritty realism will find plenty to ponder.” —Booklist

“So, to put it plainly: All the Rage is going to make you feel all the rage. And that's because Courtney Summers takes a woman's brutal reality and puts it on the page, screaming the injustices with her pen.” —Bustle.com

“Compellingly unpredictable... As a look at the trauma after an assault, it has a queasy power and some bold insight.” —NPR.com

“Romy is complex and likewise developed well as the story progresses; readers will feel for her as she grapples with her most vulnerable moments and see hope in her times of strength.” —School Library Journal (starred review)

“Romy's anguish dominates her narration, and the details of her experience-the victim-blaming by her classmates, both boys and girls, and her keeping it all secret from her mother-are acutely observed... In fact, injustice and privilege are the major themes of the novel, and those are topics that ensure this book will elicit lively classroom discussion.” —The Bulletin of the Center for Children's Books

Courtney Summers is the bestselling and critically acclaimed author of several novels for young adults, including Cracked Up to Be, All the Rage and Sadie. Her work has been released to multiple starred reviews, received numerous awards and honors--including the Edgar Award, John Spray Mystery Award, Cybils Award and Odyssey Award--and has been recognized by many library, 'Best Of' and Readers' Choice lists. She lives and writes in Canada.
Loading...
or
Not Currently Available for Direct Purchase