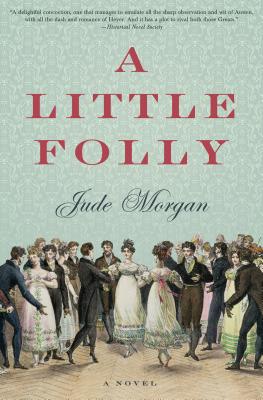 A witty and romantic novel of Regency love, family and appalling scandal, from a latter-day Jane Austen

When their strait-laced, domineering father, Sir Clement Carnell, dies, Valentine throws open their Devonshire estate of Pennacombe to their fashionable cousins from London and Louisa feels free at last to reject the man Sir Clement wanted her to marry.

Soon, the temptations of Regency London beckon, including the beautiful, scandalous, and very married Lady Harriet Eversholt, with whom Valentine becomes dangerously involved. Meanwhile, Louisa finds that freedom of choice is as daunting as it is exciting. Will the opportunity to indulge in a little folly lead to fulfillment or disaster?

"A Little Folly "is a novel to make Jane Austen proud and Georgette Heyer envious. An acclaimed author of historical fiction, Jude Morgan weaves together the very best of Regency era writing with "refreshingly original characters, an intriguing plot, and an elegantly ironic style." ("RT Book Reviews "on "Indiscretion"). In this exciting new novel, Morgan delivers a story that, yet again, will bring cheers from critics and readers alike.


Praise For A Little Folly…

"A Little Folly manages to emulate the sharp observation and wit of Austen, with all the dash and romance of Heyer [and] a plot to rival both those Greats. . . . Effortlessly entertaining, [with] greater depth and soul than a Regency romance might reasonably be expected to have." —Historical Novel Society

JUDE MORGAN, who studied with Malcolm Bradbury and Angela Carter, lives in England. Morgan's previous works include "Emily and Charlotte," a novel about the Bronte sisters; "An Accomplished Woman; ""Symphony;" "Indiscretion; "and "Passion," which was called "one of the best books of 2005" by "The Washington Post Book World.""
Loading...
or
Not Currently Available for Direct Purchase