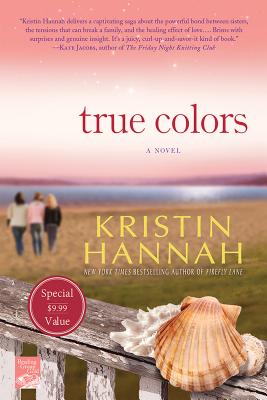 True Colors is New York Times bestselling author Kristin Hannah's most provocative, compelling, and heart-wrenching story yet. With the luminous writing and unforgettable characters that are her trademarks, she tells the story of three sisters whose once-solid world is broken apart by jealousy, betrayal, and the kind of passion that rarely comes along.

The Grey sisters have always been close. After their mother's death, the girls banded together, becoming best friends. Their stern, disapproving father cares less about his children than about his reputation. To Henry Grey, appearances are everything, and years later, he still demands that his daughters reflect his standing in the community.

Winona, the oldest, needs her father's approval most of all. An overweight bookworm who never felt at home on the sprawling horse ranch that has been in her family for three generations, she knows that she doesn't have the qualities her father values. But as the best lawyer in town, she's determined to someday find a way to prove her worth to him.

Aurora, the middle sister, is the family peacemaker. She brokers every dispute and tries to keep them all happy, even as she hides her own secret pain.

Vivi Ann is the undisputed star of the family. A stunningly beautiful dreamer with a heart as big as the ocean in front of her house, she is adored by all who know her. Everything comes easily for Vivi Ann, until a stranger comes to town. . . .

In a matter of moments, everything will change. The Grey sisters will be pitted against one another in ways that none could have imagined. Loyalties will be tested and secrets revealed, and a terrible, shocking crime will shatter both their family and their beloved town.

With breathtaking pace and penetrating emotional insight, True Colors is an unforgettable novel about sisters, rivalry, forgiveness, redemption---and ultimately, what it means to be a family.


Praise For True Colors: A Novel…

“In this big juicy novel, bestselling author Hannah (Firefly Lane) scores again with a tale of three sisters set in the sprawling ranchlands of Washington state...Deliciously romantic and often heartbreaking, this is a book you'll want to climb inside of and stay as long as possible.” —People

“A beautiful and captivating story of love and rivalry, family and community, that readers will happily devour.” —Booklist

“An engrossing, fast-paced story that will appeal to readers of Barbara Delinsky and fans of women's fiction.” —Library Journal

Kristin Hannah is the New York Times bestselling author of novels including Night Road, Firefly Lane, True Colors and Winter Garden. She was born in Southern California and moved to Western Washington when she was eight. A former lawyer, Hannah started writing when she was pregnant and on bed rest for five months. Writing soon became an obsession, and she has been at it ever since. She is the mother of one son and lives with her husband in the Pacific Northwest and Hawaii.
Loading...
or
Not Currently Available for Direct Purchase