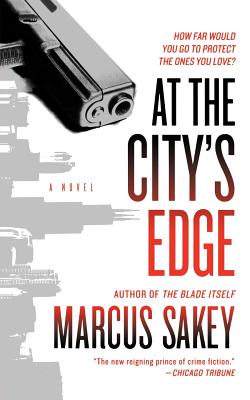 At the City's Edge

Jason Palmer loved being a soldier. But after returning home from Iraq with an "other than honorable" discharge, he's finding rebuilding his life the toughest battle yet.Elena Cruz is a talented cop, the first woman to make Chicago's prestigious Gang Intelligence Unit. She's ready for anything the job can throw at her.Until Jason's brother, a prominent community activist, is murdered in front of his own son.Now, stalked by brutal men with a shadowy agenda, Jason and Elena must unravel a conspiracy stretching from the darkest alleys of the ghetto to the manicured lawns of the city's power brokers. In a world where corruption and violence are simply the cost of doing business, two damaged people are all that stand between an innocent child--and the killers who will stop at nothing to find him.


Praise For At the City's Edge…

"At the City's Edge crackles and sears like a rip-roaring fire."--Tess Gerritsen, author of The Bone Garden"Goes from zero to sixty in a blazing rush. Sakey knows how to thrill a reader."--David Morrell, author of Creepers

MARCUS SAKEY is the author of the critically acclaimed novel "The Blade Itself." He has shadowed homicide detectives, toured the morgue, interviewed soldiers, ridden with gang cops, and learned to pick a dead bolt in sixty seconds. Born in Flint, Michigan, he now lives in Chicago with his wife.
Loading...
or
Not Currently Available for Direct Purchase