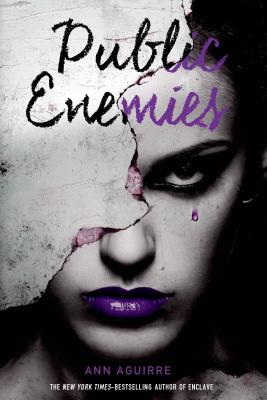 Public Enemies, book two of the Immortal Game series, is a darkly fantastic, heart-pounding book by Ann Aguirre, the New York Times- and USA Today-bestselling author of the Razorland series.

Learn the rules of the game . . . and then play better than anyone else.

Through a Faustian bargain, Edie Kramer has been pulled into the dangerous world of the Immortal Game, where belief makes your nightmares real. Hungry for sport, fears-made-flesh are always raising the stakes. To them, human lives are less than nothing, just pieces on a board.

Because of her boyfriend Kian’s sacrifice, she’s operating under the mysterious Harbinger’s aegis, but his patronage could prove as fatal as the opposition. Raw from deepest loss, she’s terrified over the deal Kian made for her. Though her very public enemies keep sending foot soldiers—mercenary monsters committed to her destruction—she’s not the one playing under a doom clock. Kian has six months, unless Edie can save him. And this is a game she can’t bear to lose.

"Should particularly appeal to fans of Ilsa Bick's "The Dark Passages" series and Mary Weber's "The Storm Siren" trilogy. . . . This engaging nightmare will make even mature horror readers check under the bed at night." -School Library Journal

"The world-building that creates the dark and suspenseful atmosphere for this story is in full swing, and readers will enjoy the larger glimpses into the underworld. The romance between Edie and Kian is also heating up, and Edie gets the opportunity to act as his guardian. . . . The plot is fast paced and leads to a suspenseful ending." -VOYA

ANN AGUIRRE is a New York Times & USA Today bestselling author and RITA winner with a degree in English literature. She lives in sunny Mexico with her husband, children, and various pets. She likes books, emo music, and action movies. She writes all kinds of genre fiction for adults and teens, including the Razorland series and Like Never and Always.
Loading...
or
Not Currently Available for Direct Purchase