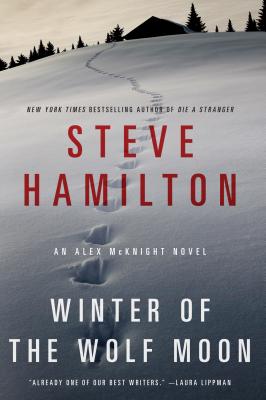 Winter of the Wolf Moon

Steve Hamilton's novels starring ex-cop and sometime-P.I. Alex McKnight have won multiple awards and appeared on bestseller lists nationwide. And when you start reading Winter of the Wolf Moon, you will instantly understand why. . .

When a young woman from the Ojibwa tribe asks McKnight for shelter from her violent boyfriend, McKnight agrees. But after letting her stay in one of his cabins, he finds her gone the next morning. His search for her brings on a host of suspects, bruising encounters, and a thickening web of crime, all obscured by the relentless whiplash of brutal snowstorms. From the secret world of the Ojibwa reservation to the Canadian border and deep into the silent woods, someone is out to kill—and McKnight is heading right into the line of fire.

“I'm often asked to recommend a detective series readers might have missed. This is it. Hamilton has been flying under the radar with his Alex McKnight series for too long.” —Harlan Coben

“Hamilton understands the border mentality, and his tensile prose--with its shifting images of heat and cold, light and dark--reflects the dramatic, often violent contradictions of people who live on the edge of the world.” —The New York Times Book Review