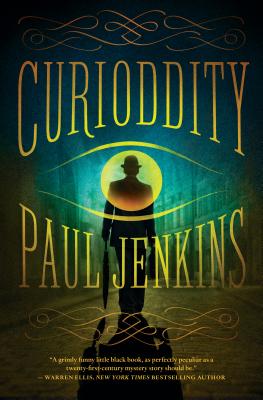 Will Morgan is a creature of habit—a low-budget insurance detective who walks to and from work with the flow of one-way traffic, and for whom imagination is a thing of the distant past. When a job opportunity enters the frame in the form of the mysterious Mr. Dinsdale—curator of the ever so slightly less-than-impressive Curioddity Museum—Will reluctantly accepts the task of finding a missing box of levity (the opposite of gravity). What he soon learns, however, is that there is another world out there—a world of magic we can only see by learning to un-look at things—and in this world there are people who want to close the Curioddity museum down. With the help of his eccentric new girlfriend Lucy, Will will do everything he can to deliver on his promise to help Mr. Dinsdale keep the Curioddity Museum in business.


Praise For Curioddity: A Novel…

PAUL JENKINS is a British born comic writer who lives in Atlanta, GA. He began his career at Mirage Studios working on Teenage Mutant Ninja Turtles. Jenkins has written some of the biggest characters for Marvel and DC Comics, including Spider-Man, Batman, Incredible Hulk, and Hellblazer. He is best known for reviving The Inhumans as part of Marvel Knights and creating The Sentry for Marvel Comics. Jenkins also writes for video games on hits like The Darkness, Incredible Hulk, and God of War.
Loading...
or
Not Currently Available for Direct Purchase