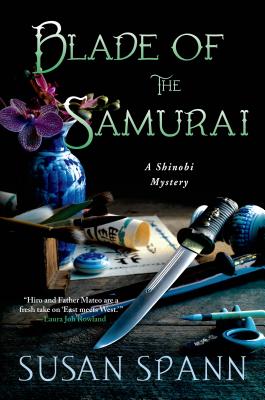 Blade of the Samurai

June, 1565: Master ninja Hiro Hattori receives a pre-dawn visit from Kazu, a fellow shinobi working undercover at the shogunate. Hours before, the shogun''s cousin, Saburo, was stabbed to death in the shogun's palace. The murder weapon: Kazu's personal dagger. Kazu says he's innocent, and begs for Hiro's help, but his story gives Hiro reason to doubt the young shinobi's claims.

When the shogun summons Hiro and Father Mateo, the Portuguese Jesuit priest under Hiro's protection, to find the killer, Hiro finds himself forced to choose between friendship and personal honor.

The investigation reveals a plot to assassinate the shogun and overthrow the ruling Ashikaga clan. With Lord Oda's enemy forces approaching Kyoto, and the murderer poised to strike again, Hiro must use his assassin's skills to reveal the killer's identity and protect the shogun at any cost. Kazu, now trapped in the city, still refuses to explain his whereabouts at the time of the murder. But a suspicious shogunate maid, Saburo's wife, and the shogun's stable master also had reasons to want Saburo dead. With the shogun demanding the murderer's head before Lord Oda reaches the city, Hiro and Father Mateo must produce the killer in time . . . or die in his place.

Susan Spann's Blade of the Samurai is a complex mystery that will transport readers to a thrilling and unforgettable adventure in sixteenth-century Japan.

“An outstanding historical mystery set in Japan during the shogunate…What adds to the enjoyment of the history is a most elegant mystery that grows out of the politics of the time… All this is told in stripped down prose as we edge carefully through the thickets of confusion and emerge on to the plain of revelation as the killer is unmasked and uncertainty over the threat to the shogun is resolved. ” —San Francisco Book Review

“The second Hiro Hattori mystery (after 2013's Claws of the Cat) finds the sixteenth-century ninja--and unofficial investigator--presented with an interesting problem…A strong second entry in a very promising series.” —Booklist

“After her exciting historical mystery debut, Claws of the Cat, Spann proves she has the touch in her sophomore entry. The deceptively simple prose educates readers about 16th-century Japan, while the well-plotted story moves at ninja speed. The endearing characters fight to defend honor and truth, giving this strong YA appeal.” —Library Journal