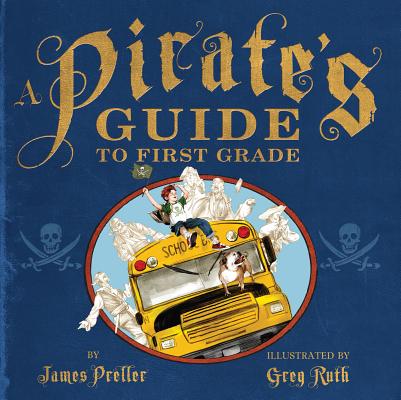 Arr! It's the first day of first grade, and it's all hands on deck for a young pirate and his crew. How much trouble can they get into? What will they do at recess? And, most important, what treasure awaits them at school?

Praise For A Pirate's Guide to First Grade…

“Kids will love the contrast between the antics of the imaginary pirates and the regular school-day routine.” —Scripps Howard News Service

“This rambunctious first day tale is fit for any young buccaneer… Preller's buoyant pirate-inflected storytelling and Ruth's illustrations, which have a decidedly vintage flair, form an exuberant tribute to imagination and a spirit of adventure.” —Publishers Weekly, starred review

“Young would-be buccaneers facing their own first-day jitters will enjoy this droll title, which ends with a cheer or libraries. A great choice for sharing on September 19, International Talk Like a Pirate Day.” —Booklist

“Pirate-addled readers will dance a jig; press-ganged kids will be happy for the glossary. Good fun, me hearties.” —Kirkus Reviews